On May 13, 1787, eleven ships left Portsmouth, England to settle the first European penal colony in Australia. Over a thousand convicts, as well as marines, civil officers, and free people, sailed for roughly 250 days to arrive at Botany Bay. The First Fleet, as the expedition is remembered, transported much else, including two things that destroyed natives and their land: smallpox and rabbits.

Bred as food animals by the fleet, plenty of those small mammals escaped. Over time they bred like—well, you know. Stew meat and cute pet, in Australia these rabbits became rampant pests, forcing the government to try various extermination methods over the centuries. The rabbits ravaged pasture vegetation, young trees, and shrubs, and are also responsible for erosion on an epic scale, decimating topsoil, leaving it infertile. 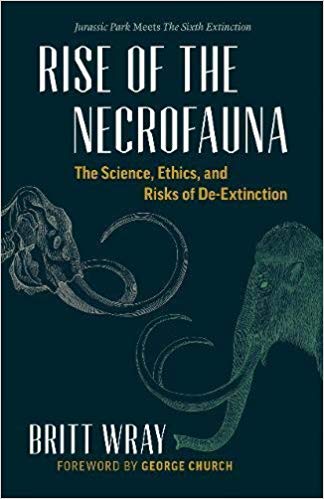 Humans are not great at foresight. We think in hours and moments, not centuries or even decades. When introducing a species to a new environment there’s no telling what the consequences will be. Will it become a predator? Or a prey that boosts the population of another predator? Will it destroy ecosystems? How will the local food sources affect its gut microbiome?

These are just some of the ecological questions Britt Wray entertains in Rise of the Necrofauna: The Science, Ethics, and Risks of De-Exinction. The Ph.D. candidate in Science Communication at the University of Copenhagen and co-host of the BBC podcast, Tomorrow’s World, isn’t wondering about living species, however. As the title of her book suggests, she’s curious about the consequences of reviving extinct species in a world that’s moved on.

Wray told me she’s fascinated with the myriad ways we’re closing the gap between science fiction and reality, particularly by “new forms of tech that are allowing us to bypass the timescales of Darwinian evolution” as well as where “conservation biology and synthetic biology overlap.”

Wray’s inquisitive nature led her to hang out with leading researchers in genetics and conservation biology, including Harvard’s George Church (who wrote the foreword), Revive and Restore’s Ryan Phelan and her husband, Stewart Brand (creator of The Whole Earth Catalog), and Russian scientist Sergey Zimov, who is working on reviving the wooly mammoth to help slow the thawing of his nation’s permafrost.

Which brings up an intriguing question: Could the reintroduction of a hairy elephant be the key to reducing and even reversing climate change? The jury is out. As Wray writes, there is no single answer as to why anyone wants to resurrect the dead. Some wholeheartedly believe they can positively influence damaged ecosystems; others are in it for the dough—although the dough hasn’t exactly been flowing.

While advocates like George R.R. Martin and Peter Thiel have invested in various efforts, Wray says, “there’s a lot of assumptions that people in Silicon Valley, for example, would want to dump lots of money into this and that hasn’t really been the case.”

An important piece of this puzzle is public sentiment. Ignorant of the complex mechanisms of de-extinction—for one, every animal needs a living host species, so a woolly mammoth would really be more like a hairy elephant than anything that once traversed Siberia—educating people on the intersection between genetics, ecosystems, and science fiction is a tall order.

Beyond short memories, humans have a penchant for ignoring information we don’t find agreeable. Sure, Dolly is a success story, but no one discusses the 277 failed attempts at making her, which caused much death and suffering along the way. The same is true of de-extinction. Public expectation is a critical element in this process. As she told me,

“We can create close facsimiles or close proxies of extinct animals by taking their genes from assembled ancient genomes and then editing them into their closest living relatives, or using back-breeding techniques, or even cloning, depending on the method being used and how many genes you might actually bring over into the into the new animal in order to reconstitute it.”

Why we’d bring back any species is at the heart of Wray’s wonderful book. If a species became extinct because we ate all of them, as with the great auk, would we revive it only to eat them again, this time as exotica on high-brow menus? Or will we cage them for financial gain, a la some of the intentions behind Jurassic Park? What happens when we patent a species, if that proves to be the only financially plausible model?

We make cartoons about rabbits even if they’re pests under certain conditions. If they were to become extinct there would certainly be an outcry. But no one is rushing to make movies about repopulating a salamander. Yet what if that species proves most beneficial to our current environment? Our tendency to anthropomorphize animals closest to us could negatively shift our focus. As Wray says,

“We often connect with animals that have big beautiful eyes that can look back at us with a spark of what we might recognize as a form of intelligence rather than an insect that’s stuck in a very rigid body that we can’t really make eye contact with. We see this bias again and again in terms of endangered species and those that humans are excited about.”

My favorite quote in the book comes from Donna Haraway, Distinguished American Professor Emerita in the History of Consciousness Department and Feminist Studies Department at the University of California, Santa Cruz. When Wray reached out to interview her, Haraway replied that she was “chatted out” about the topic, but did jot down thoughts in an email, in which she calls for “much less resurrection mythology and much more mundane care.”

We crave excitement and novelty; we’d rather be told we can lose thirty pounds in a month on this amazing new diet than thirty pounds over thirty weeks with basic nutritional science, even though the latter is the right approach. The same yearning for novelty exists in de-extinction. While we need mundane care, we’d rather focus on the metaphysics of bringing back the dead.

Why bring a species back when there are so many deserving candidates on the brink of extinction? What about humans? Our time as the alpha predator has been short in the long scale of historical time. We’re depleting resources at a rate previously unknown in the animal kingdom. A large part of the problem is that we forget we’re animals subject to the same laws that govern the rest of nature. Sure, playing god is fun during our short time in the sun, but that same sun is destroying everything we hold dear after we’ve done to the planet. What then?

Wray doesn’t have an answer. The strength of her work is in asking the right questions. When we talk, I mention that I’m fascinated with her focus in science communication. We’re chatting only days after a fake story about the flu vaccine causing this year’s influenza outbreak trends on Facebook. I ask her if effectively communicating science in a world so susceptible to distraction and untruths is even possible.

“Public engagement and science communication with all sorts of diverse people call upon us to make relationships with audiences that are thoughtful and that are based on building trust. Sometimes it’s not the message that matters but the messenger, and being able to relay information that could have an impact on how a person takes up the story and understands it.”

Related
Starts With A Bang
The quantum reason why neutral atoms first formed
If it weren’t for the intricate rules of quantum physics, we wouldn’t have formed neutral atoms “only” ~380,000 years after the Big Bang.
Hard Science
Some earthquakes last for seconds, others for minutes — and a few for decades
What do you call it when the Earth shakes for three decades?
Sponsored
What childhood “money story” is shaping your financial behaviors?
Here are the signs that you inherited “money anxiety” from your parents.
The Present
The “maritime Indiana Jones” who salvages shipwrecks now wants to tow icebergs
Simple physics makes hauling vast ice chunks thousands of miles fiendishly difficult — but not impossible.
Neuropsych
Inside the brains of aging dogs
In a citizen science project, thousands of pet dogs are helping scientists to understand what happens to memory and cognition in old age.
Up Next
Starts With A Bang
How The James Webb Space Telescope Will Deploy (In An Ideal World)
If everything goes right, astronomy will take a magnificent leap into the future. But here’s what needs to happen first.Back in 2000, NASA held their decadal survey, choosing what would become […]