Scientists have found a way to coax photons, a.k.a particles of light, to “merge” or join with each other. Atoms frequently do so when they make a chemical compound or molecule.

Consider: If you shine the beams of light from 2 flashlights across each other, they don’t do anything special. They don’t interact, in other words — they’re 2 separate beams of light.

However, multiple physicists have created such a thing, at several universities — MIT, Harvard University, Imperial College London, and more. So … what’s it mean, and how did they make this happen?

(Every Star Wars fan out there immediately jumped to lightsabers, amirite?)

In the near term, it could mean the much-vaunted idea of “quantum computing” may be closer to reality. 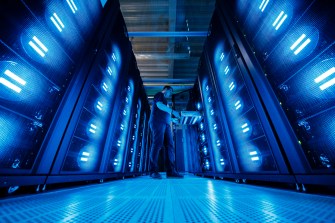 How did they create this phenomenon?

By sending photons — light particles — through a cloud of super-cooled ribidium gas, they slowed that light down 100,000 times. When they did so, it came out the other side bonded with other photons — sometimes in pairs, sometimes in triplets.

These pairs and triplets give off a different energy signature than normal, as well. Basically, it’s a new form of light.

“All good and well, but does it hold together?” you’re thinking. At least, if you think about this kind of thing much.

In fact, they hold surprisingly well, and the more photons that are bound together, the more strength that the bond has.

The theory goes that a single photon, as it enters the cloud, hops from one atom to another, “Like a bee flitting between flowers,” according to the study press release.

As that transpires, a photon might bind to an atom, forming a hybrid photon-atom (or polariton). If 2 of these meet in the cloud, they interact with each other. Then on the way out of the cloud, the atoms stay behind and the photons head out — still together.

Where the practical value of this starts to come into play is this simple fact: Photons bound together can carry information — bam! Quantum computing, which can create uncrackable codes, super powerful computers, and more.

It’s tantalizing, the possibilities of what was discovered here.

I’m still waiting for those lightsabers, though. You?

Related
13.8
What kind of intelligence is artificial intelligence?
The initial goal of AI was to create machines that think like humans. But that is not what happened at all.
The Present
What’s effective altruism? A philosopher explains
Some effective altruists “earn to give” — they make as much money as they can and then donate most of it to charities.
Sponsored
How to avoid family fights about money
No family is immune to money conflicts, no matter how much they love each other. Here’s what to look out for.
L&D strategy
Best practices for a needs analysis [Templates included]
Conducting a thorough needs analysis requires care, curiosity, and open-mindedness.
Neuropsych
Memory and the benefits of forgetting
Forgetfulness isn’t always a “glitch” in our memories; it can be a tool to help us make sense of the present and plan for the future.
Up Next
Politics & Current Affairs
Renewable energies are about to surpass nuclear power on U.S. electrical grid
In 2017, renewable energies accounted for 18 percent of the total power contributed to the electrical grid in the U.S. – the highest level ever.