While it has certainly become a generally useful and indelible part of our lives, the smartphone has also been much maligned for contributing to social degradation and mental illness. But instead of causing health issues, could smartphones help cure them? A technology developed at UC Berkeley uses video from a smartphone-connected microscope to detect infection by parasitic worms and help treat river blindness.

The tech, called LaoScope, can look at a drop of blood and automatically detect and even quantify infection from parasitic worms called Onchocerca volvulus. These worms, found mainly in Africa, can cause river blindness, which is a debilitating disease that humans get through bites of infected black flies. Without treatment, infections in the eye can result in blindness.

River blindness, or onchocerciasis, affects at least 25 million people, according to estimates by the World Health Organization. Of these 300,000 are blind and 800,000 have some visual impairment. Another 123 million are at risk for the infection. 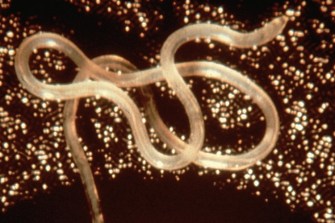 Another issue in treating this illness is that the medication ivermectin can be deadly to those who have another parasitic worm in the blood called Loa loa. What the scientists were able to create in their smartphone-linked device is a quick and easy way to test for these parasites in the blood. In fact, the LoaScope has already been used to analyze the blood of villagers in Cameroon, with more than 15,000 patients receiving appropriate treatment due to the technology.

Here’s a view of Loa loa parasites in the blood as captured by the LoaScope and displayed on an iPhone screen:

The study’s co-author and Berkeley bioengineering professor Daniel Fletcher, whose lab invented the technology, said that it demonstrates the potential of using a smartphone in medicine –

“This is not just a step forward for efforts to eliminate river blindness, but it is a demonstration that mobile microscopy — based on a mobile phone — can safely and effectively expand access to healthcare,” said Fletcher. “This work sets the stage for expanding the use of mobile microscopy to improve diagnosis and treatment of other diseases, both in low-resource areas and eventually back in the U.S.”

The technology underlying the LaoScope that turns the camera of a mobile device like phone or tablet into a quality light microscope is called CellScope. Besides detecting infectious and eye diseases, it can have applications in ocean microorganism surveys and education.

You can read the new paper here, published in the New England Journal of Medicine.

Related
Hard Science
Some earthquakes last for seconds, others for minutes — and a few for decades
What do you call it when the Earth shakes for three decades?
Sponsored
What childhood “money story” is shaping your financial behaviors?
Here are the signs that you inherited “money anxiety” from your parents.
The Present
The “maritime Indiana Jones” who salvages shipwrecks now wants to tow icebergs
Simple physics makes hauling vast ice chunks thousands of miles fiendishly difficult — but not impossible.
Neuropsych
Inside the brains of aging dogs
In a citizen science project, thousands of pet dogs are helping scientists to understand what happens to memory and cognition in old age.
Neuropsych
The most common source of awe might surprise you
It’s us.
Up Next
Neuropsych
How Thinking in a Foreign Language Reduces Superstitious Belief
A new study shows that “magical thinking” can be reduced by presenting and processing information in a second language.