Though schizophrenia is typically diagnosed when men are in their late teens/early 20s and women are in their late 20s/early 30s, scientists have long suspected the condition begins much earlier. A new study, ‘Convergence of placenta biology and genetic risk for schizophrenia‘, has found that mishaps in the womb affecting the placenta may be the missing puzzle piece. “For the first time, we have found an explanation for the connection between early life complications, genetic risk, and their impact on mental illness and it all converges on the placenta,” according to Daniel R. Weinberger, lead investigator of the Lieber Institute for Brain Development, where the study was done.

The reason schizophrenia takes so long to clearly manifest isn’t yet known, though some believe it has to do with the myelination process in which the brain is remodeled from adolescence into a person’s 20s. The prefrontal cortex—the area responsible for higher reasoning—is the last part of the brain to mature, and it could be that the condition only manifests as that occurs. Some wonder if it’s a matter of too many neurons being shed during the myelination process.

In any event, it’s assumed that the disease has something to do with genetics. The child of a schizophrenic parent has a 10% chance of inheriting it, compared with 1% of the general population. If a grandparent also has schizophrenia, the chances go up further. Still, genetic precursors alone account for just a tiny increase in the odds of developing schizophrenia. Earlier research has revealed, however, a doubling of the risk when there are complications during pregnancy or in very early life. The question has been “why?” 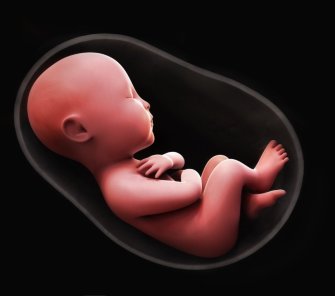 New interest in a neglected organ

The seldom-studied placenta—the only organ regularly thrown away without being examined—has long played a role in rituals and mythology, but this is the first time the placenta has been implicated in human brain development.

The authors of the new study analyzed the obstetrical history and genetic profiles of 2,800 adult individuals from a range of ethnic backgrounds and from four countries, including the U.S., Europe, and Asia. Of the cohort, 2,038 have schizophrenia. The study correlated polygenic risk scores (PRSs) and early-life complications (ELCs). Amplifying previous research, the study authors found that individuals who had genetic factors and who had experienced obstetric complications were five times more likely to develop schizophrenia than those with genetic factors alone.

The researchers analyzed diverse placental clinical samples, some of which had come from pregnancies involving preeclampsia and intrauterine growth restriction (IUGR). They found genetic loci that account for schizophrenia were often switched into an “on” state when complications had occurred during pregnancy. The more inflammation present in the placenta, the more schizophrenia genes were turned on.

How the stress/inflammation turns on the genes isn’t clear, and further research will be needed to sort that out. But, as Weinberger notes, “The surprising results of this study make the placenta the centerpiece of a new realm of biological investigation related to how genes and the environment interact to alter the trajectory of human brain development.”

Related
Life
Scientists use CRISPR to insert an alligator gene into a catfish
Disease kills off 40% of farmed catfish. This gene protects them.
Neuropsych
How you breathe affects your brain
Your breathing rhythm influences a wide range of behaviors, cognition, and emotion.
Health
What happens when regular porn watchers abstain for a week?
Researchers watched for signs of withdrawal — but didn’t find any.
Neuropsych
Daily caffeine intake temporarily alters your brain structure
Compared to people who took a placebo, the brains of those who took caffeine pills had a temporarily smaller gray matter volume.
Thinking
Why you should laugh at yourself, according to Seneca and Nietzsche
“It is more human to laugh at life than to lament it.”
Up Next
Politics & Current Affairs
Why Oscar Wilde was a socialist anarchist
Was Oscar Wilde—witty author, gay rights icon, and lover of champagne and material beauty—a radical socialist?