High levels of glyphosate, a chemical found in a popular weedkiller, have been found in cereals and snack foods marketed to children in the U.S., according to a new report.

The findings come from the Environmental Working Group (EWG), a non-profit organization based in Washington, D.C. After conducting analyses of common oat- and wheat-based food products, like Cheerios and Quaker Old Fashioned Oats, the group found glyphosate was present in all but two of 45 samples. Almost three-quarters of the samples were found to have glyphosate levels that exceeded the EWG’s ‘health benchmark’.

Glyphosate is the active ingredient in Roundup, a widely used weedkiller manufactured by Monsanto that was introduced to American markets in 1974. It’s not exactly clear how dangerous the chemical is for humans. The World Health Organization lists glyphosate as a ‘probable carcinogen’ and California says it’s known to cause cancer. Still, other scientists say the health risks are so minuscule that foods containing the chemical are basically safe to eat.

“When you’re dealing with something like that, a 1-in-a-million increased risk of cancer, I would say that isn’t a significant level to be particularly concerned about,” Michael Davoren, who studies molecular toxicology at UCLA and was not involved in the report, told WebMD. 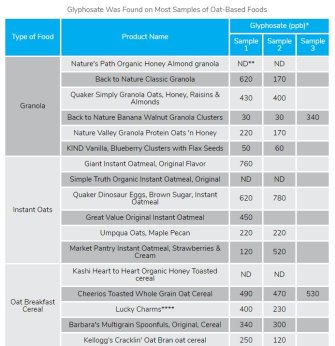 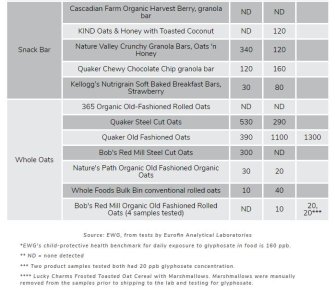 The report comes a week after a court awarded $289 million to a former Monsanto groundskeeper who said he’d developed cancer after being exposed to glyphosate at his job. Monsanto Vice President Scott Partridge said in a statement:

Glyphosate “has a 40-year history of safe use and continues to be a vital, effective and safe tool for farmers and others. More than 800 scientific studies, the US EPA, the National Institutes of Health and regulators around the world have concluded that glyphosate is safe for use and does not cause cancer.”

“According to the EPA, people should avoid consuming more than 2 mg of glyphosate for every kilogram of body weight,” Alex Berezow, senior fellow of biomedical science at the American Council on Science and Health, a nonprofit group that says it advocates for evidence-based science and medicine, told CNN.

“The good news is that nobody on Earth consumes anywhere near that amount of glyphosate … The EWG fabricated its own safety standard so that they could promote organic food. They’ve been doing this for years — ignoring the scientific literature in order to lobby for the organic industry.”

However, EWG President Ken Cook told The Guardianthat the EPA has a “lawless” nature under the Trump administration and that companies should “step up” to reduce glyphosate in food to a level below what’s mandated.

“Our view is that the government standards set by the Environmental Protection Agency pose real health risks to Americans ­– particularly children, who are more sensitive to the effects of toxic chemicals than adults,” he said.

A forensics expert explains what’s involved with documenting human rights violations during conflicts, from Afghanistan to Ukraine.
Up Next
Technology & Innovation

Space mining is officially a thing, and now there are classes in how to do it

Want to go to school to learn how to mine in space? Now you can.