A rare cosmic alignment has offered astronomers a glimpse of a star nine billion light-years from Earth—the most distant ever observed.

The star, MACS J1149 Lensed Star 1, or simply Icarus, is a B-type star, commonly referred to as a blue supergiant. Icarus is hotter, larger, and brighter than our sun, but its distance from Earth makes it impossible for modern telescopes to spot. 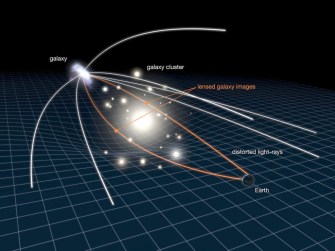 Gravitational lensing typically magnifies distant objects by a magnitude of 50. However, a well-aligned individual star could theoretically boost that magnification by a factor of many thousands, as researchers wrote in an article published in Nature Astronomy.

“A single star in a foreground lens, if precisely aligned with a background star, can magnify the background star thousands of times,” reads a statement from the University of California, Berkeley. “In this case, a star about the size of our sun briefly passed directly through the line of sight between the distant star Icarus and Hubble, boosting its brightness more than 2,000 times.” 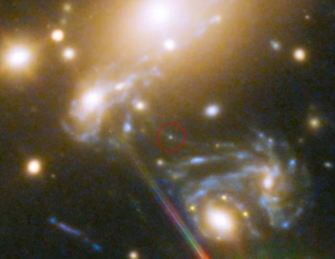 As it happens, the alignment of Icarus means there will likely be more gravitational lensing occurrences during which astronomers can observe the star—even ones that could magnify its brightness by 10,000 times instead of 2,000.

“There are alignments like this all over the place as background stars or stars in lensing galaxies move around,” said Alex Filippenko, a professor of astronomy at UC Berkeley and one of many co-authors of the report. “[It offers] the possibility of studying very distant stars dating from the early universe, just as we have been using gravitational lensing to study distant galaxies… For this type of research, nature has provided us with a larger telescope than we can possibly build!”

Related
Starts With A Bang
The galaxy cluster that broke modified gravity
19 years ago, the Bullet Cluster provided an empirical proof for dark matter. Even today, modified gravity still can’t explain it.
Neuropsych
Psychology studies that go viral are likelier to be bogus
A new 20-year analysis of over 14,000 psychology studies finds that a study’s media coverage is negatively linked to its replicability.
The Future
How a device transmits radio waves with almost no power
Apart from the energy needed to flip the switch, no other energy is needed to transmit the information.
The Present
Radical idea: Redraw the U.S. map as a nation of city-states
While cities drive national economic growth, their political geography means they cannot effectively deal with inequality, poverty, and other socioeconomic problems.
The Learning Curve
Why do high IQ people stagnate in their careers? Emotional intelligence
Research suggests that emotional intelligence is more vital for success than IQ.
Up Next
Surprising Science
Two new studies confirm medical marijuana staves off opiate abuse
One possible solution to the opioid epidemic is already accessible in several states, with more to come.