Earlier this year, Caltech astronomers announced there was evidence of a giant ninth planet orbiting at the edges of our solar system. Planet Nine hasn’t actually been observed, but astrophysicistshave long known that the structure of our solar system doesn’t add up. So, scientists are looking for it, but it’s going to be a while, as its orbit takes take an incredible 10,000 to 20,000 years to complete. That’s a lot of space to search.

New findings about this mystery planet continue to come out. One of these new findings concerns the origins of Planet Nine, in that it may not originally be from our solar system; we may have snatched it from another.

“What we were wondering is, how could you actually form a planet out there? Because the rest of the Solar System appears to be so compact, and then you have this enormous gap where there’s really not very much, and then a very large planet, nearly 10 times the mass of Earth,” astronomer Alexander Mustill explained in the video below. “It seems a little implausible to us that you would just ‘create’ this thing out at such a distance.”

Mustill and his team of researchers say around 4.5 billion years ago Planet Nine may have formed around another star and was then captured in our sun’s orbit. The researchers have published their study on Planet Nine’s potential capture in Monthly Notices of the Royal Astronomical Society: Letters.

Caltech astronomer Mike Brown believes it wasn’t captured so much as exiled from its solar system. “My pet theory is it happened early and there was a lot of gas around in the solar nebula and that gas sort of slowed it down and kept it from being completely removed,” Brown told New Scientist.

Of course, all of this speculation is dependent on this planet actually existing. If this Planet Nine does exist, it would explain many of the mysteries surrounding the workings of our solar system:

The trick will be finding it. However, at its closest point to Earth the planet will still be 18.6 billion miles away, shrouded in the dark void of space. 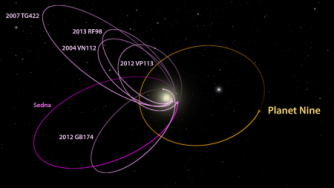 The next major inflection point for humanity: Programming neurons

Neurotechnology pioneers envision an expanded future for humanity straight out of science fiction.