A Florida teenager will have a bad headache for a while after being shot through the head with a three-foot fishing spear, but doctors expect a full recovery. Remarkably, doctors say that after two to three months of rehabilitation the patient will retain the full speech functions.

The teenager, Yasser Lopez, was very lucky. The spear missed all of the main blood vessels in his brain, just as the construction foreman Phineas Gage was lucky to have survived an accident in 1848 when a powder explosion shot a tamping iron through his brain. Gage survived, and went on to become the world’s most celebrated specimen of neuroscience research. 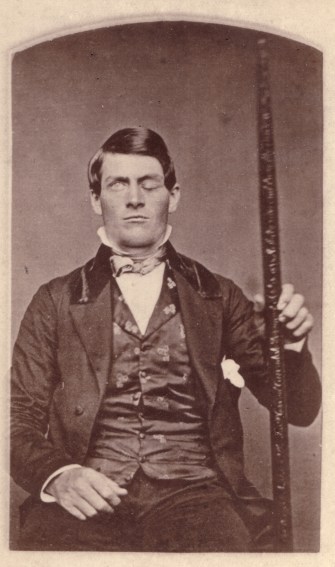 According to Dr. Adam Kepecs, Assistant Professor of Neuroscience at Cold Spring Harbor Laboratory, Gage provided scientists with the first hints that different functions like decision-making and language acquisition were grouped into localized areas within the brain.

When we consider such remarkable recoveries from brain trauma, such as Congresswoman Gabrielle Giffords surviving a point blank gun shot to the head, the discussion inevitably includes Phineas Gage.

This is heady stuff. It not only gives us hope for one of modern science’s fastest advancing frontiers, but it also gives us hope for a scientific explanation of consciousness, by doing nothing less than shedding light on the workings of the most breathtakingly complex machine in the known universe. It isn’t often we can genuinely seek to put to bed a question which has puzzled scientists and philosophers since science and philosophy have existed.

The striking difference between cases of localized brain trauma, like the difference between the famous cases of Gage and of Giffords, highlights the advances we have seen and are seeing. Where Gage saw personality changes and a crippling inability to perform socially, Giffords’ remarkable, ongoing recovery shows us how far we’ve come.

The largest shift between the 19th and 21st centuries in this regard is the ability to study healthy brains through fMRI and other technologies, where before it was only through compromised brains that we could further our understanding of neurological functioning. Given what we know today about the brain and how to treat it, it is not just in the case of freak accidents that brain trauma can be survived and succesfully recovered from.

The remarkable thing about this is the breadth of the treatments which can help crippled brains. Behavioral therapy includes singing and completing puzzles, and major surgery in the brain and hormonal treatments can now be comfortably and reasonably used in the same breath when discussing brain rehabilitation.

Related
Thinking
Finding your essential self: the ancient philosophy of Zhuangzi explained
Adopting a healthy scepticism towards inherited ideas means “emptying the container of the Self.”
The Future
Startup’s bladeless flying car is designed to reach Mach 0.8
One of Jetoptera’s VTOLs is expected to reach speeds of around 614 mph, about as fast as a commercial jet airliner.
Health
New blood types are often discovered following medical disasters
New blood types are regularly discovered by an unusual absence or an unusual presence — both of which can result in tragedy.
The neuroscience of loving music
Humans are musical animals four million years in the making, explained by music expert Michael Spitzer.
▸
8 min
—
with
Michael Spitzer
Life
Scientists use CRISPR to insert an alligator gene into a catfish
Disease kills off 40% of farmed catfish. This gene protects them.
Up Next
Flexing the Brain: A Q&A with Michael Scanlon
Millions of people log on to Lumosity daily to flex their brain muscles–and hopefully improve memory, attention and general cognitive performance in the process.  But this brain training site has […]