What’s our position in the universe? Some astronomers believe that the relative emptiness in our location in space may be why we haven’t found other intelligent life yet. It may even go beyond that. One theory states that our universe is actually trapped inside a giant black hole, which itself is part of a much larger cosmos.

It all centers around a different theory of what exactly a black hole is. The general understanding is nothing can escape a black hole’s intense gravity, not even light. Called the black hole information paradox, it’s thought that even the information about an object that gets sucked in vanishes into oblivion. But therein lies a problem.

This understanding violates a certain rule in quantum mechanics known as “unitarity,” which states that information can never be completely lost. Some trace of it will always remain. So how can scientists get over the hump? One way, according to a small, plucky group of scientists, is that our universe sits in the center of a black hole. This is known as the ER = EPR conjecture. How does that make sense?

Before the Big Bang, there was what was called the singularity, an infinitely hot, immeasurably dense point containing all the matter in the universe. This exploded and spread out in all directions, creating the expanding cosmos we see today. One problem though, many physicists see this as impossible. 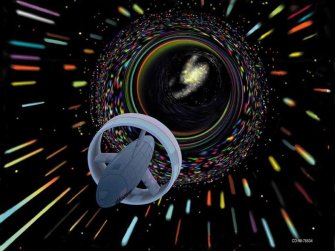 Could a black hole be a portal to another universe? Credit: Les Bossinas (Cortez III Service Corp.), 1998, NASA.

Starting in the 1960s, a small band of physicists have been considering a Big Bounce rather than a Big Bang. In addition to curved space-time, there’s a thing called torsion, which takes into consideration the spin of particles. On the macroscale, this results in a twisting of the fabric of space. Some scientists believe torsion might even be able to counteract gravity. As the universe spreads out, in this view, more energy is used up and more matter enters into the universe, which is distributed evenly.

The more matter created the greater the force of gravity, which at some point begins to compress the universe. The force of torsion however prevents total collapse at a certain point, causing the cosmos to bounce back. It’s like a rubber ball that’s been compressed and released. This is what physicists call the Big Bounce. There may have even been more than one. Each bounce would create a new black hole, actually a wormhole, which acts as a gateway into another universe or another part of our own. This means there’s an even greater universe must exist, which is inside ours.

The larger universe could be checked with black holes stretching on and on, or even have layers of them–like Russian dolls, depending how many times this has occurred, making for a very strange multiverse indeed. That’s a far different theory than the “space-time singularities” Einstein predicted inhabit the center of black holes. 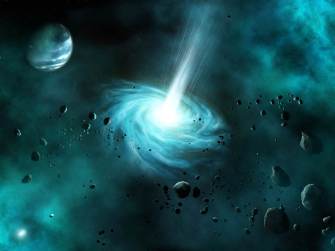 Besides resolving the issue of the singularity, this theory can also help us understand why there’s so little antimatter in our universe. There should’ve been equal amounts of matter and antimatter created after the Big Bang. But despite a multitude of careful observations, antimatter is surprisingly rare.

One theory is that slightly more matter was created than antimatter. The matter and antimatter atoms were attracted to one another, cancelling each other out, leaving only this minority of matter left over. Trouble is, no one can account for why there’d be more matter than antimatter.

With the ER = EPR conjecture, while matter decays into electrons and quarks, which are abundant in our universe, antimatter decays into the mysterious force known as dark energy, which is thought to push galaxies on, accounting for the ever-accelerating rate of cosmic expansion. 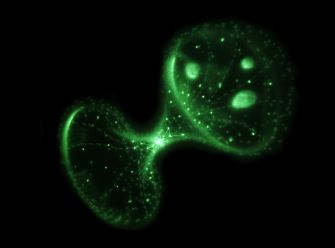 Quantum entanglement could be explained through the ER=EPR conjecture. Credit: YouTube.

So black holes would be wormhole systems, according to the conjecture. A black hole would suck things in at one end, while a white hole would push them out the other, and into a new universe or another point in our own. Juan Maldacena of Princeton and Leonard Susskind of Stanford first proposed the conjecture in 2013. The theory marries quantum teleportation with wormholes. Such teleportation occurs when two particles become entangled. This occurs when two particles interact and develop the same spin. Their interaction somehow mysteriously connects them.

Even if one is on the other side of the universe, they’re still inter-related, and that particle can travel to its brethren across the entire expanse faster than the speed of light. How does it work? This surprisingly simple ER=EPR conjecture could be the answer, and as such, help heal the rift between quantum mechanics and general relativity, leading to the much sought after unified theory of everything.

The tunnel between a black and a white hole is called the throat. In a 2017 paper published in the journal High Energy Physics–Theory, Ping Gao and Daniel Jafferis of Harvard and Aron Wall of Stanford, built upon the ER = EPR conjecture. They’ve proven mathematically that if two black holes were lined up in just the right way, their unique connection, down to the quantum level, would sustain the throat of the wormhole and keep it open.

Related
Life
Scientists use CRISPR to insert an alligator gene into a catfish
Disease kills off 40% of farmed catfish. This gene protects them.
Neuropsych
How you breathe affects your brain
Your breathing rhythm influences a wide range of behaviors, cognition, and emotion.
Health
What happens when regular porn watchers abstain for a week?
Researchers watched for signs of withdrawal — but didn’t find any.
Neuropsych
Daily caffeine intake temporarily alters your brain structure
Compared to people who took a placebo, the brains of those who took caffeine pills had a temporarily smaller gray matter volume.
Thinking
Why you should laugh at yourself, according to Seneca and Nietzsche
“It is more human to laugh at life than to lament it.”
Up Next
Surprising Science
NASA technology reveals hidden text on Dead Sea Scrolls
The Dead Sea Scrolls were first discovered in the West Bank in 1946, but now a specialized camera is helping researchers read bits of the manuscripts for the first time.