The Supreme Court ruling last week against the EPA’s “Mercury Rule” is a setback, but hardly a fatal blow, to the agency’s efforts to reduce air pollutants from fossil fuel-burning power plants. The ruling was about procedure, not the EPA’s authority to regulate dangerous pollution. Not that big a deal, really.

But the ruling raises a much bigger issue; the widespread and — based on the scientific evidence — excessive fear of mercury. And therein lies a larger cautionary tale about many common fears that fly in the face of the facts, and how those excessive fears arise, and the harm those worries can do to you and me.

Consider this chart, a breakout by the EPA of the relative harm that various pollutants covered by their rule might do. Notice the slices. The health benefits from mercury reduction would be so small that mercury doesn’t even get its own slice. (PM stands for particulate matter – the tiny particles in power plant emissions that burrow deep into our lungs and interfere with cardiovascular health, causing the most immediate health damage from burning fossil fuels. CO2 is carbon dioxide, a potent greenhouse gas, but not much of a direct threat to health. Air toxics are the scary chemical-named stuff in air pollution that, relative to other components, have minimal negative health effects, by the EPAs estimates.) 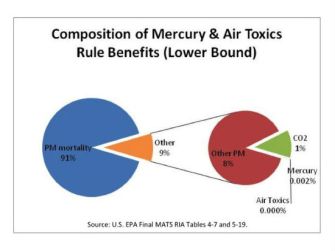 The EPA ran the costs of complying with the mercury rule against the actual health benefits of the mercury reduction (although too late in the process, according to the Supreme Court, the procedural issue on which they based their ruling). They estimated that while it would cost nearly $10 billion to implement the rule, the savings in human health from the mercury reductions alone – translated into dollars – would be tiny, between $4 million and $9 million. The benefits in human health from reducing the other pollutants, however, would be massive. Translated into dollars, those health benefits would be worth between $26 billion and $89 billion. The benefits of the overall rule FAR outweigh its costs.

Why do the health benefits of mercury reduction seem so surprisingly small? Because mercury is nowhere near the danger that many people commonly fear. The foundational study that determined the harm of mercury to human health, “Cognitive deficit in 7-year-old children with prenatal exposure to methylmercury,”  found that pregnant women who ate seafood with high doses of mercury had kids who by age 7 developed ‘subtle mental deficits.’

How subtle? According to the study, which played a key role in establishing the regulation of mercury (and helped inform the EPA’s cost-benefit analysis), less than one IQ point per kid, so subtle that it couldn’t be detected in any one child. As the authors noted, “Clinical examination and neurophysiological testing did not reveal any clear-cut mercury-related abnormalities.” They found that the actual neurotoxic effect of mercury, via fetal exposure, is so subtle that it can only be detected by studying the entire population. (In this case the population was in the Faroe Islands in the northern Atlantic, where the diet is mostly seafood high in mercury — which gets into those fish and marine mammals when emissions from power plants rain down and are taken up by small creatures at the bottom of the marine food chain, whereupon levels biomagnify on the way up to the big creatures that eat lots of small ones.)

Nobody else in the population, including the mothers themselves, suffered any detectable health harm at all. And this was from high-dose exposures, much higher than the normal fish-eating American gets.

This is no love letter to mercury. It does have human health effects, and impacts on wildlife. It is a neurotoxin, and worthy of concern. But the qualifications about just how neurotoxic it is, and to whichsubpopulations, are rarely included in news stories that simply declare mercury to be dangerous, a black-and-white description that serves the public poorly. It serves environmental scientists well, however, since these are people dedicated, honorably, to raising concern about such threats. They describe the risk to journalists in dramatic and simplified ways, often leaving out these mitigating distinctions, and the journalists repeat those simplistic, dramatic, attention-getting descriptions, and society ends up with less than the whole picture — creating fears that exceed the actual threat.

This process happens with lots of risks, environmental and otherwise. Scientists and others over-dramatize some threat and journalists readily relay those alarms to the public without reporting key details, especially about the degree of harm and the dose it takes to actually do that harm, leading to an under-informed public more worried about some things than the evidence warrants. And that Risk Perception Gap, as I call it, can be risky all by itself. I have several adult friends who have cut back on their seafood consumption because of fear of mercury, though it poses no danger to them at those doses, foregoing fish rich in fatty acids that would protect them from heart disease, a much greater actual threat.

Excessive worry also translates into demands from a worried public for government action to protect us from what we’re worried about, and the money and time and resources devoted to lesser threats are then not available to protect us from bigger ones. The title of the rule bears that out. Based on the actual risk it should be called the Particulate Matter Rule, but mercury is the threat more widely known and feared, so a Mercury Rule is easier to sell to the worried public.

Which makes this a teaching moment. We need to think a little more carefully about risk. We need to ask simple questions about the degree of hazard, and dose, before we jump to uninformed conclusions that may feel right, but which could actually be harmful all by themselves. And journalism needs to do a more thorough job reporting on risk, bringing us not just the simplified scary aspect of things, but all the information we need to make more intelligent choices for ourselves and the environment.

Scientists ranked countries on their end-of-life care. The U.S. fared poorly.
Up Next
Personal Growth

How Accurate Could a Computer Be at Diagnosing Depression?

Researchers have developed computer software that can diagnose clinical depression by noticing how people behave during psychiatric interviews.