When we think about the origins of life on Earth, we think mostly of biology and chemistry. Still, when we consider the initial “spark” of life, the conversation has to include physics, energy, and electrons. “Humans get their energy from the sugars in the foods we eat. Proteins in our cells take electrons from sugar, then bind it to the oxygen we breathe in,” says Rutgers’ Josh Mancini. Here’s a puzzle, though: This can’t be what happened billions of years ago when life first began — there we no sugars from plants and so on, and more critically, there was no oxygen in which to move electrons from one place to another to produce the necessary energy.

To solve this mystery, Mancini and his colleagues are simulating primordial Earths in a small, cylindrical chamber in the Department of Marine Science and at the Center for Advanced Biotechnology and Medicine Building on Rutger’s New Brunswick, NJ campus. Their NASA-funded exploration may also explain how life could begin on other oxygen-free planets. 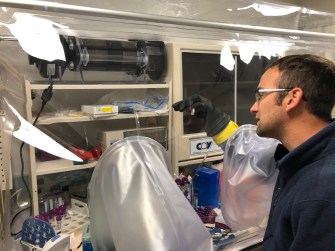 Explains Mancini, “What we’re trying to figure out is the alternative places electrons could go in the absence of oxygen.” “It was most likely either through hydrogen from hydrothermal vents or light energy from the sun,” he says. Otherwise, the researchers suspect that a conductive metal such as nickel or iron could have been the medium in which electrons could be moved from one place to another, and they’re using nickel in their primordial-Earth chamber.

In search of the recipe for a catalyzation between proteins and nickel, Mancini, Saroj Poudel, and Douglas Pike are developing computer models of 4-billion-year-old, pre-life proteins by reverse-engineering their living descendants, keeping in mind the chemistry and physics of primordial earth. Each model is then assembled as what looks like a white powder but is actually millions of tiny protein molecules, and placed into the oxygen-free chamber along with nickel to see what happens. 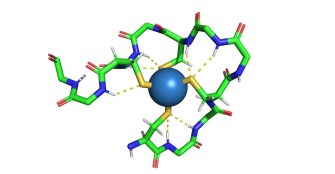 The researchers are part of Rutgers’ and NASA’s ENIGMA astrobiology team. Defining proteins as “nanomachines that enable cells to generate energy and self-replicate,” the mission of the project is to figure out how these “nanomachines allowed early life to convert chemical energy in the environment into useful biologic energy.” ENIGMA stands for “Evolution of Nanomachines in Geospheres and Microbial Ancestors.”

“Our goal,” says Poudel, “is to take early evolving enzymes and see how they could evolve into something more complex that we know exists today. That will help us determine how we could have evolved here on Earth, and what is possible on other planets.”

Mancini and his colleagues have not yet found the magical protein/nickel combination they seek, but, if they do, at least one vexing question about the origin of life on Earth may finally have an answer.

Even if we traveled at the speed of light, we'd never catch up to these galaxies.
Up Next
Think Again Podcasts

Reginald Dwayne Betts – Nothing to resurrect after prison

"I think when you come to grips with what happened, it gives you a chance of doing something different. What's really dark is when you're going through something and you have no perspective." By revisiting—through poetry—his 9 years in prison for a teenage carjacking, Reginald Dwayne Betts finds freedoms most of us have never known.