Biologists have been speculating on the reason why such a complicated process for reproduction, sex, became the most common mode for advanced organisms, particularly when asexual reproduction has so many advantages. It is easier, faster, uses a lot less energy, a mate is not required, and the result is an offspring which is fully matured, and can protect and care for itself. With sexual reproduction, finding a mate can be challenging. Once the risky business of impregnation and birth have taken place, protecting and caring for the baby remains difficult, leaving families open to attack from challengers and predators.

Single celled organisms such as bacteria reproduce asexually. Among complex organisms, many plants and even some animals do too. These include bananas, starfish, and even komodo dragons. Despite this, up to 99% of complex organisms reproduce sexually, at least some of the time. So it must convey some type of advantage.

Dr. Stuart Auld and colleagues at the University of Stirling in Scotland wanted to explore further. Auld is among the Faculty of Natural Sciences at the university. He said that this question is one of the oldest in evolutionary biology. What’s more, sex’s presence is pervasive in nature. “Sex explains the presence of the peacock’s tail, the stag’s antlers and the male bird of paradise’s elaborate dance,” Auld said. 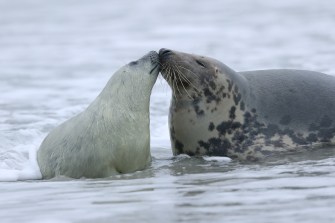 Organisms go through a lot to find a mate and reproduce sexually. How does it benefit them?

German evolutionary biologist August Weismann in 1886 proposed that sex was a way to hasten evolution. Beneficial mutations could be introduced quickly, while those which were harmful would be sloughed off. Sex also allows for different combinations of genes which can help organisms evolve rapidly to fit new situations. A theory, developed by Leigh Van Valen in the late 1980s, called the “Red Queen Hypothesis,” is now the prevailing one. This was taken from the character in Through the Looking Glass, more commonly known as Alice in Wonderland.

When Alice meets the Red Queen, she must take part in a bizarre chess game, where she runs as fast as she can in order to keep up with the other players. This constant running to maintain position is the theme the hypothesis adopts. Organisms react not only to the environment but each other. When one organism develops an adaptation that gives it an advantage, it affects its predator, and prey.

Lions for instance depend on the antelope population. Should antelope develop the ability to run faster through a rapid mutation, the lion population would come under pressure. Only when lions developed the ability to run faster or to pounce farther would a balance be struck. There exists a similar arms race between host organisms and their parasites. But since single cells organisms don’t live too long, pathogens must evolve rapidly or face extinction. Meanwhile, a host organism needs to evolve just as quickly to resist infection.

The water flea is one of those rare species which reproduces both sexually and asexually.

To hasten evolution, the right combination of genes is required. So the more combinations an organism has access to, the better its chances. Though a strong theory, it’s been difficult to test. After all, how do you compare those organisms who reproduce sexually to those who don’t? Auld and colleagues found a way.

Published in the journal Royal Society Proceedings B, researchers found that at the time when sexual reproduction came on the scene, “parasites adapted to infect the previous generations.” Therefore, reproducing sexually meant seriously undermining the parasites’ ability to cause infection. Auld and colleagues selected the water flea, a bizarre creature which reproduces both sexually and asexually. Just a few others organisms do, such as yeast and the snail.

The water fleas used in this experiment were collected from the natural environment, as were their bacterial parasites. After a period, researchers gathered female water flea offspring who were produced either sexually or through cloning. Under controlled conditions, they exposed the offspring to the parasites. Those who reproduced sexually were twice as resistant to infection, researchers found. According to Dr. Auld, these findings suggest that, “The ever-present need to evade disease can explain why sex persists in the natural world in spite of the costs.”

To learn more about the Red Queen Hypothesis, click here:

Three reasons why a radically better future is more likely than we think.
Up Next
Surprising Science

A Woman Just Died From an Infection No U.S. Antibiotics Could Beat

A superbug that resisted all available bacteria kills a woman in Reno, Nevada.