Big Think and the Mental Health Channel are proud to launch Big Thinkers on Mental Health, a new series dedicated to open discussion of anxiety, depression, and the many other psychological disorders that affect millions worldwide.

In this second installment, Dr. Helen Blair Simpson, director of the Center for Obsessive-Compulsive and Related Disorders at Columbia University, paints a vivid portrait of the many different versions of OCD.

What distinguishes real OCD from how it’s depicted in pop culture — a characteristic of someone’s perfectionist tendencies — is that sufferers respond to stimuli in the same way everyone else does. 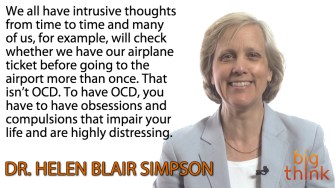 The essential difference is that OCD victims experience a never-ending stream of intrusive stimuli, i.e., thoughts, telling them there is a problem. Just as anyone would, they respond, attempting to solve the problem, whether it’s a dirty apartment, disorganized desk, or belief that is more pathological.

In the video below, Dr. Simpson discusses one patient who thought the word “California” carried disease with it, so anything with the word California on it had to be removed from her house.

Where do these intrusive thoughts come from? It’s not entirely clear, but researchers have documented definite biological causes, such as hyperactive circuitry in the brain. Understanding the causes and symptoms of the disease brings us closer to helping those who suffer from it.

Avoid Divorce. Get Married in Your Late 20s.

Not too young, not too old.