On October 17, 2015, a rainy night to begin with, a huge tsunami cresting at 600 feet barreled through the darkness of the remote Taan fjord in Alaska. It stripped away forests on both sides of the fjord, and dragged an iceberg out into Icy Bay on the coast. Nobody witnessed it, and it’s only by seismic waves picked up 155 kilometers away that scientists knew something had happened. That something was a one-minute-long 200-million ton, 72-million cubic meter landslide of stones slamming down into the deep waters of the fjord. To give you a sense of the resulting wave’s height, the tsunami that devastated Japan in 2011 was only 130 feet above sea level. To say that scientists are concerned is an understatement, since this may just one of many such catastrophes we can expect thanks to climate change. There have been five other huge landslides in the area in just the last five years.

Colin Stark and Goran Ekström  reported their discovery of the landslide at a Fall 2015 meeting of the American Geophysical Union. It’s being called the “Tyndall Glacier landslide,” since it occurred in the glacier’s neighborhood. The climate-change induced 17 kilometer retreat of Tyndall Glacier up the fjord is probably why the landslide occurred — with the 400-meter-high ice now gone, mountainsides of weak rock are now exposed and unsupported. After picking up the seismic activity, Stark and Ekstrom were able to see the aftermath in high-resolution satellite imagery provided by the Polar Geospatial Center. Scientists were finally able to see the landslide’s effects in person in 2016. 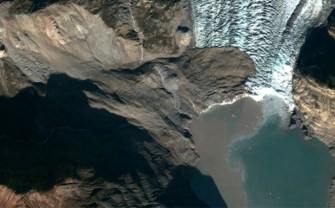 Spruce trees 1,700 feet up the mountain were ripped away by the tsunami, as you can see here.

Before and after (POLAR GEOSPATIAL CENTER)

Stark and Ekström are pioneers in the use of seismography to detect landslides. They’ve used the technique to analyze about 50 landslides so far, some of which were otherwise unnoticed by anyone else. Ekström told Atlas Obscura, “We now know that when we detect something, it is often spectacular. We had just detected another landslide in the Yukon a week earlier, and had it confirmed, so I was quite excited when I saw another detection in the Saint Elias range, especially since it was not detected by anyone else, and because it was so large.” 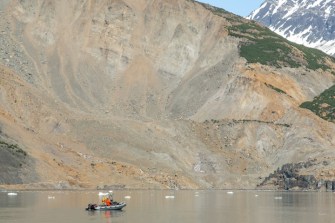 Geologist Andrew Mattox visited the site 2016 and told Atlas Obscura, “I’m a geologist and I’d say it was one of the most impressive events I’ve ever seen the aftermath of. At the mouth of the fjord, the tsunami scraped everything off the rock—the trees, the soil, everything. It wasn’t until I reached the top that I realized how big this was and had a sense of the unimaginable destructive force. And it all happened in a matter of minutes.” 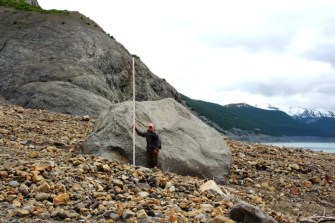 Fortunately, no fishermen were on the fjord at the time, and the tsunami just happened to miss the Icy Bay Lodge. Mattox notes, “It was night and it was raining and I picture guests in there streaming movies and only realizing what happened when they came out the next morning and found loads and loads of shredded forest coming out into the bay.”

We may not be so lucky in the future, and this has scientists understandably terrified. Bretwood “Hig” Higman, a tsunami expert who was unsettlingly aware another landslide could occur at any moment when he surveyed that damage, says, “We can look at this as an analog to what could happen in places like Glacier Bay, where there are steep slopes and deep water inlets where cruise ships with two or three thousand people visit in the summer, and fjords in Norway where communities could be threatened by this sort of tsunami.” 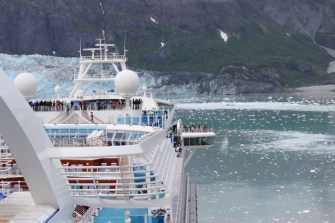 “These megatsunamis are infrequent in the historical record but will most likely increase [with the glaciers retreating],” glaciologist Chris Larsen recently told the University of Alaska at Fairbanks.

Based on product labeling claims, scientists hypothesized that green cleaners were less toxic. They were wrong.
Up Next
Surprising Science

Steven Kotler talks about the neuroscience about how flow state turns off time.