A group of authors from several backgrounds, including Thomas Stoerk of the Environmental Defense Fund, Gernot Wagner of the Harvard University Center for the Environment, and Bob Ward of the ESRC Centre for Climate Change Economics and Policy at the London School of Economics and Political Science, have written a paper warning that the true economic damage of global warming is “grossly” underestimated. 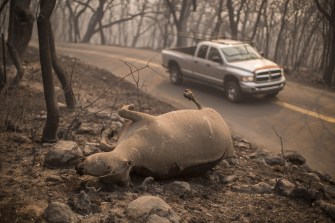 The body of a cow that died in the Atlas Fire is seen in Soda Canyon on October 11, 2017 near Napa, California. (Photo by David McNew/Getty Images)

The authors state that there is “ … mounting evidence that current economic models of the aggregate global impacts of climate change are inadequate in their treatment of uncertainty and grossly underestimate potential future risks.”

One of the key components of their analysis is that the models used currently ignore the possibility and potential for “tipping points.” These are points beyond which “… impacts accelerate, become unstoppable, or become irreversible.” An example might be the melting of the Antarctic ice sheet; this would greatly accelerate the rate of change.

The projections they want to draw attention to are used by the United Nations Intergovernmental Panel on Climate Change (IPCC), and the authors of the study suggest the data that the IPCC uses is based on inaccurate economic models.

The projected economic damage, which will affect the southern United States much more seriously than the north, is already daunting: 30 percent of GDP destroyed, and a world cost of $535 trillion by the end of this century using existing climate/economic models. 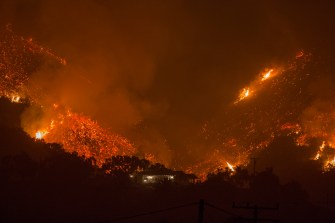 With deadly hurricanes last season—including the one that eventually killed over 4600 residents of Puerto Rico—and the wildfires that consumed vast swaths of California, the weather-related events that global warming is making much worse are just a part of the total picture that includes both economic damage and lives lost.

The first world that humans should inhabit beyond the Earth is the Moon, not Mars. Here's why terraforming our lunar neighbor is so appealing.
Up Next
Politics & Current Affairs

Trump says he has the ‘absolute right’ to pardon himself. Does he?

President Donald Trump wrote on Twitter on Monday that the Russia investigation is unconstitutional and that he has the right to pardon himself, even though he's "done nothing wrong!"