It sounds like something out of sci-fi, but scientists have just published a study in Nature announcing the development of the first autonomous robots that can merge their central processing units (CPUs) to create single a “hive” mind. Think the Borg in Star Trek TNG, or the bot swarms of the Matrix trilogy. The purpose of these new robots is, of course, not so diabolical. The idea is that they’re able to arrange themselves on the fly into different configurations for different tasks, and to suit different environments. Plus, they’re too cute to be evil. 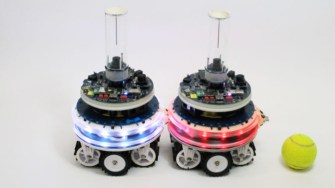 Two bots and their ball (M. DORIGO AND NITHIN MATHEWS)

Prior to this breakthrough from Belgium’s Université Libre de Bruxelles, robots could cooperate, but that was “a little bit like if we had a bunch of people joining together to do something,” according to study coauthor Marco Dorigo. Each of those previous robots had its own sensors and CPUs, or “nervous system,” along with a pre-determined shape. As such, the study notes, a team of “modular robots lack the essential ingredient that enables complex sensorimotor responses in higher order animals, namely a nervous system that spans the whole body and transforms a composite system into a single, holistic entity.”

The new robots are mergeable nervous system (MNS) devices. Once merged as a group, one robot serves as a single “brain unit” and has access to all of the individual robots’ sensors and actuators, allowing the group to behave as a unified, fluid organism. (Each robot also retains an awareness of its own hardware.) And since the robots communicate wirelessly via WiFi, they don’t even need to be touching, allowing the creation of all sorts of arrangements.

In this video, you can see the MNS robots gather and then disperse into a variety of shapes. The red ones are the brain units.

Even more impressive, a group — having just one “mind,” after all — can cohesively respond to an external stimulus. In this video, a stimulus approaches individual units at first, causing them to point out the threat to each other. Then the little green bully goes after merged groups.

Groups are also self-aware to a degree, capable of diagnosing unit failure thanks to a “heartbeat protocol”:

When a fault is detected, the group can heal itself.

At this point, the MNS bots attach to each other in just two dimensions via simple, rigid connectors. The study’s authors intend to next develop a more fluid connection capability that allows the robots to arrange themselves in three dimensions, and with flexible joints.

Zw II 96 in the constellation of Delphinus, the Dolphin, is an example of a galaxy merger located some 500 million light-years away. Star formation, the population of newly-created stars, […]