Opponents of genetically modified food claim that their demand for labeling is only intended to provide choice for consumers. In truth, as many of them have said, they hope that labels will scare people away from buying such products and kill GMO technology itself. But a new survey suggests that by giving consumers choice, labels might actually reassure, and encourage sales, more than scare and dissuade.

The monthly Food Demand Survey by Jayson Lusk at Oklahoma State asks several questions about labeling and choice that I proposed to Lusk, based on the risk perception research of Paul Slovic and others who have found that when we engage in a potential risk voluntarily, the very fact that we are taking a possible risk by choice makes the risk feel less scary. Slovic’s research on risk perception has also established that if we trust the government agencies that are supposed to protect us, we’ll be less afraid, which suggests that a government/FDA label should also reassure, since we trust FDA food labels in general. Lusk asked about that too.

Lusk asked whether “requiring mandatory labels on genetically modified food would increase the confidence I have in the safety of genetically engineered food. On a scale of 1 (strongly disagree) to 5 (strongly agree) a majority of respondents (3.49) said that labels would reassure. And he asked whether “the presence of a ‘contains genetically engineered ingredients label,’ by providing choice, would encourage me to consider buying a product.” A slight majority (3.14) said yes.

Here is the full section on labeling from the survey. 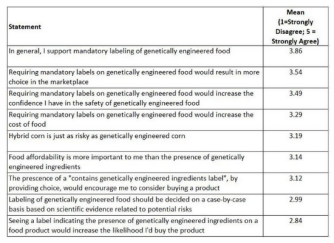 To be sure, the results are equivocal. Lusk also asked if “seeing a label indicating the presence of genetically engineered ingredients on a food product would increase the likelihood I’d buy the product.” A slight majority said no, it wouldn’t. And the numbers were not overwhelmingly clear for any question (except for the one about whether people support labeling in general, which got a 3.86 out of 5).

But what these results do suggest is that GMO labels won’t produce the fear and rejection of products that GMO opponents hope. This supports the case that I and others have made, that the fear of lost sales on the part of food companies is overblown, and that while labels might cost some sales, labels would be more likely to reassure and encourage purchases than scare them away.

This is supported by research on actual food sold with GMO labels. A field trial in Switzerland and another in five European countries and New Zealand found that:

The overall response to the sales experiment suggests that the mere presence of labeled GM food is not perceived as a negative externality by Swiss consumers.

A significant (and in some markets, surprisingly high) percentage of consumers in European countries appear willing to choose GM food provided there is a price advantage coupled with a consumer benefit (in this case, labels indicating the GMO food is ‘spray-free’).

There was no consistent, statistically significant difference in the average level of concern for GMOs expressed by people shown different labels. That is, the mere presence of the GMO label did not lead to a greater level of concern about GMOs.

Together, these findings strongly suggest that GMO opponents’ hope that labels will spread their fearful view of agricultural biotechnology is overly optimistic, and the Fear of Fear (credit for the phrase to Peter Sandman) compelling food companies’ adamant opposition to mandatory labeling is overly pessimistic. The ability to produce hybrid crops with beneficial traits has great promise for human and environmental health. The fight over labeling is a stumbling block preventing society from developing wise and safe uses of this technology, and that’s frustrating because the fight is pointless, since both sides are basing their positions on a fundamental misread of consumer risk perceptions.

Psychologists are finding that moral code violations can leave an enduring mark — and may require new types of therapy.
Up Next
Culture & Religion

What Music Was Truly Revolutionary? Hint: Not Punk.

Everyone’s coming-of-age music sounds like a personal revolution, but when did music change for everyone and all at once?