It is hard to overestimate the importance of the brain. This organ determines who we are, what we do with our bodies, and controls pretty much everything that we find valuable about the human experience.

In a development sure to be a boon to neuroscience, researchers published a new map of the brain that identified numerous undiscovered areas.

The 97 sections (per hemisphere) that were previously not known will allow scientists to delve much deeper into the brain’s functions. The new map can help surgeons and lead to cures for diseases like Alzheimer’s and autism as well a fresh understanding of how our most important organ develops and ages.

In particular, researchers from Washington University in Saint Louis found 360 sections in the cerebral cortex, the brain’s outer layer of neural tissue. With 180 sections per hemisphere, each such section coordinates a particular activity, and the sheer abundance of new cortical areas shows how much there is still to learn about the brain’s operations.

To create the map, researchers relied on brain scan data from 210 healthy young adults as well as artificial intelligence software that deduced where to find hidden regions.

Each person’s brain was scanned when they were doing nothing and another time when they were engaged in some uncomplicated tasks, like listening to a story. Brain scans from a second group of 210 people were used to confirm the initial findings. 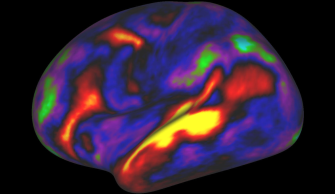 A brain scan that shows the pattern of brain activity in the left hemisphere of a person listening to stories.Credit: Matthew F. Glasser, David C. Van Essen.

While there have been previous brain maps made, the new one is a major improvement because it is based on a much larger sample of data and takes into account the brain’s multiple properties. This allows for much greater precision.

“This map you should think of as version 1.0. There may be a version 2.0 as the data get better and more eyes look at the data. We hope the map can evolve as the science progresses.”

You can read the full study here, in Nature.

Tags
brain mapnewstudy
In this article
brain mapnewstudy
Related
The Present
Shame has an evolutionary purpose, say researchers
A new study finds why shame is important for human societies.
Neuropsych
What’s better for your brain: 15 minutes of jogging or 15 minutes of relaxation?
A new study compared cognitive boosts from running versus relaxing.
Health
How the brain controls sex and attraction
Researchers discover how the brain triggers our attraction to the opposite sex and sexual behavior.
Neuropsych
Want to fall asleep faster? Try this 5-minute technique
Before you reach for another glass of warm milk, read this.
Neuropsych
How does the brain process curiosity?
Have you ever been curious about how curiosity works?
Up Next
Culture & Religion
Why Did Saudi Arabia Ban Pokémon Go?
Saudi clerics see Pokemon Go as anti-Islamic and full of forbidden symbols and ideas (like evolution!), so have renewed their 2001 fatwa on it.