We think of asteroids as giant useless rocks floating around space. Perhaps it’s a good place to hide the Millennium Falcon or a worrisome cause of a cataclysmic event. Though most are hunks of rock or ice, some are replete with iron, platinum, gold, and other precious minerals. Two NASA missions plan to explore such an asteroid, scheduled for 2021 and 2023. These are part of NASA’s Discovery Program, a class of mission considered inexpensive, capping out at $450 million apiece.

Scientists will first launch a robotic spacecraft named Lucy in October 2021. The plan is to reach a Massachusetts-size asteroid, named 16 Psyche, which is made up almost entirely of nickel and iron—much like the Earth’s core. Scientists say this metallic monolith is so enormous, it’s considered a minor planet. Psyche is about 130 miles (210 km.) in diameter. It’s located in the Trojan asteroid belt, between Jupiter and Saturn.

This kind of asteroid has never been studied before, according to Thomas Zurbuchen. He’s the associate administrator at NASA’s Science Mission Directorate in Washington. “This is what Discovery Program missions are all about,” Zurbuchen said, “boldly going to places we’ve never been to enable groundbreaking science.” Lucy will take six years to get there. Once it’s arrived, it will spend 20 months mapping and studying the asteroid. 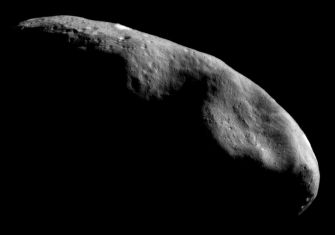 The Eros asteroid. Psyche’s mission is set to launch an entire new industry which could target bodies like this one, nearby Earth.

Jupiter has two groups of asteroids caught in its orbit. It takes the gas giant 12 years to travel around the sun, with a parade of asteroids leading it, and another trailing behind. Lucy will reach Jupiter’s asteroid belt by 2025. Over the course of eight years, it will study six Trojan asteroids in all. By examining the target asteroid 16 Psyche carefully, NASA researchers believe they can peak back billions of years, to a time shortly after the sun’s birth.

Harold F. Levison is principal investigator of the Lucy mission. He hails from the Southwest Research Institute in Colorado. Levison said, “Because the Trojans are remnants of the primordial material that formed the outer planets, they hold vital clues to deciphering the history of the solar system. Lucy, like the human fossil for which it is named, will revolutionize the understanding of our origins.” 16 Psyche may be a piece of an ancient protoplanet once as big as Mars, which shattered into pieces over billions of years, due to bombardments and collisions with other bodies, a common occurrence after the birth of our solar system. Today, it’s sort of an astronomical fossil.

Another robotic spacecraft named Psyche will follow in October 2023. After an Earth gravity assist maneuver in 2024, it will shoot past Mars in 2025, and reach the asteroid by 2030. Scientists from Arizona State University will collaborate with NASA on this mission. Lindy Elkins-Tanton of ASU is its principal investigator.

See a short segment about the mission here:

She said, “16 Psyche is the only known object of its kind in the solar system, and this is the only way humans will ever visit a core.” This could give us insight not only about our own planet, but of other terrestrial or rocky planets, such as Venus, Mars, and Mercury. But besides the scientific value, such explorations are on the brink of launching an entire new industry. Elkins-Tanton has estimated the value of the asteroid’s iron content alone at approximately $10,000 quadrillion. That’s to say nothing of the gold, copper, and platinum to be found.

The value of this asteroid alone could wipe out global debt, $60 trillion, and leave enough left over to give every human on the planet a comfortable lifestyle, or conversely, cause the collapse of the world economy and send us hurdling back to the Dark Ages. Take your pick. Elkins-Tanton suggested dragging back a hunk and doling it out little by little, but also played with the idea of solving mineral scarcity for all-time.

Meanwhile, private companies are already lining up to mine asteroids, and Congress has passed The Asteroid Act to codify the practice. Nearly 10,000 asteroids nearby Earth have startling mineral potential. And as the outspreading of smartphones, computers, and other technologies continues, globally, the demand for such minerals will only become greater and the lure of asteroid mining, much more powerful.

To learn more about the coming economic boon in asteroid mining, click here:

Three reasons why a radically better future is more likely than we think.
Up Next
Hard Science