Remember NASA’s New Horizons spacecraft and its amazing pictures of Pluto back in 2015? Its next photo target is an intriguing icy, small world — or it may be a binary orbiting pair of objects, or two stuck together — in the Kuiper Belt, four billion miles away, out near the edge or solar system. New Horizons will photograph whatever it/they is on New Year’s Day 2019. NASA wants us to be excited about this mission, and they feel the object’s current name, (486958) 2014 MU69, lacks a certain pizazz. So they’re going to let the public name it.

But slow down, Readie McReaderson. No doubt to avoid the chaos surrounding the UK Natural Environment Research Council’s (NERC) name game for a research vessel they eventually dubbed — yawn — “RRS Sir David Attenborough,” NASA’s just letting us pick the world a new nickname to replace the current one, “MU69.” Cagey.

If you’d like to get involved, here’s the link you need. The SETI institute is hosting the contest. You have until 3 pm EST/noon PST on December 1, 2017 to submit a name — NASA and the New Horizons team will “review the top vote-getters and announce their selection in early January.”

The three most popular submissions as of this writing are: 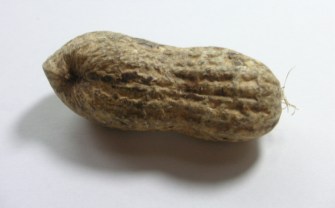 Actually, if MU69 turns out to be binary, the dicotyledonous peanut would be kind of brilliant. (ARIARI)

SETI is updating the tally hourly, and SETI has posted background on the names under consideration.

Even though the contest may eventually devolve into comedy, NASA’s pride in New Horizon’s accomplishments is understandable. As its principle investigator Alan Stern says, “New Horizons has always been about pure exploration, shedding light on new worlds like we’ve never seen before. Our close encounter with MU69 adds another chapter to this mission’s remarkable story.” 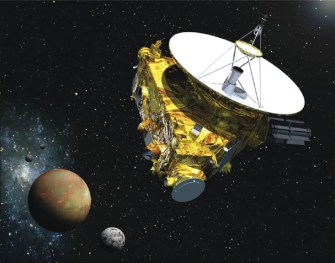 SETI’s got a few members on the New Horizons team, and one of them, Mark Showalter, is spearheading the MU69 naming contest. He was previously in charge of the Our Pluto project in which the public suggested names for prominent features on Pluto and its moon Charon. “Some of the best names for features on Pluto were nominated by members of the public during the Our Pluto campaign,” says Showalter. “I am always amazed by the creativity and imagination of the public.” (The man could have a second career in diplomacy.)

Whatever happens, these naming contest are an effective way to engage people in research that is, after all, genuinely fascinating. As Big Think’s Laurie Vasquez wrote last year about NERC’s campaign, “By welcoming the public into the project, they become part of the project, plain and simple. Yes, it can be silly, as Boaty McBoatface has demonstrated, but it’s also allowed NERC’s project to spread farther than they could have hoped.”

Related
The Present
Radical idea: Redraw the U.S. map as a nation of city-states
While cities drive national economic growth, their political geography means they cannot effectively deal with inequality, poverty, and other socioeconomic problems.
The Learning Curve
Why do high IQ people stagnate in their careers? Emotional intelligence
Research suggests that emotional intelligence is more vital for success than IQ.
The Present
Even in the age of AI, some problems are just too difficult for computers
Computers are growing more powerful and more capable, but everything has limits
The Future
How the metaverse will revolutionize K-12 and higher education
Imagine going on a tour through the human circulatory system as a tiny cell. That is just one example of education in the metaverse.
Starts With A Bang
Ask Ethan: What are white holes, and do they really exist?
In General Relativity, white holes are just as mathematically plausible as black holes. Black holes are real; what about white holes?
Up Next
Neuropsych
Scientists Discover Why Your Brain Can’t Block Out Unwanted Thoughts
A new study explains why some people seem to be better than others at ridding their minds of intrusive thoughts.