By now, those January resolutions are likely a fleeting memory, dreams of a prior person that would have been nice, if only. The very idea of annual change has become a recurring joke. Unfortunately so has one of most common resolutions: losing weight.

Only this joke isn’t funny for numerous Americans struggling with their weight. According to new research, more people are abandoning any hope of shedding pounds. Strangely, as obesity is becoming more socially accepted, more people are becoming more comfortable with it. Research authors at Georgia Southern University’s College of Public Health believe this phenomenon is playing a role in reducing motivation by lowering perceived markers of healthiness.

Weight is a complex topic. Over the last fourteen years I’ve worked with thousands of clients and students dealing with a range of body issues, weight and body image at the top. There is no silver bullet for eliminating obesity as genetics, nutrition, activity levels, stress, mental health, and environmental conditions all play a role.

Add to this the fact that the body mass index marker commonly used to measure obesity is flawed. Thin does not always equate to healthy, while many people who store a few extra pounds are in exceptional shape. Any time I tackle this subject the nuanced realities of divergent bodies and histories have to come into play. It’s not easy to come to terms with the fact that some people eat terribly and remain thin, but that doesn’t make it untrue. Having grown up overweight, I’m on the side that needs to eat very well and keep moving to maintain my health.

That said, this research is disturbing for a few reasons. While progress is definitely being made when we don’t perceive emaciated cover models and six-pack abs as the only vision of fitness—and when we stop fat shaming without recognizing the complex mechanisms of metabolism—there is no excuse for surrendering the quest for better health because more people believe we’re inherently an overweight animal. 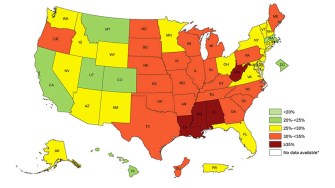 A 2010 study in Obesity notes that while health benefits from improved body image are possible, the shift in perception also renders mute the efficacy of public health campaigns targeting weight issues, such as the restriction of sugar-heavy beverages and dangers of fast food.

This “body weight misperception” might be playing a role in the surrender. Yet as the LA Timesreports, there might be an even simpler explanation:

The authors also acknowledged another possibility: that many people have been overweight or obese for so long — and tried dieting so many times — that they have simply given up.

Dieting is not diet. Restrictive programs that limit previously enjoyed foods are extremely challenging for people to follow. While immediate changes might be evident, long-term metabolic shifts are rare—our body is not designed that way. TheTimes reporter, Melissa Healey, notes that our bodies practically ensure that the weight returns.

Metabolic rate drops, allowing the post-diet body to do more with fewer calories. Myriad hormonal signals shift in ways that boost appetite. Those changes endure for at least a year after weight is lost, the study found. Even after weight is regained, many of those changes persist, leading to further weight gain.

The issue is further confused when celebrity doctors peddle green tea pills and acai elixirs as guaranteed fat burners and yoga and fitness instructors sell you on month-long challenges that operate under the assumption a few dozen crunches and a couple of rounds of high-intensity interval training is going to shed away the belly fat. None of these things are true.

Our bodies are designed to lose a pound or two a week. That’s not going to sell programs or bottles of magical medicines, however. And so after the honeymoon is over and the weight creeps back thanks to thwarted metabolic changes, frustration ensues. More diet books are purchased, more programs sold, until, eventually, surrender.

The researchers note that 95 percent of dieters regain the weight within five years, with most putting on an extra few pounds to boot. Problems associated with obesity go far beyond self-image. Diabetes, for example, comes with a $245 billion yearly price tag in America. As NPR reports,

In the U.S., a women with diabetes incurs, on average, about $283,000 in lifetime health care costs.

With the average American consuming twenty-two teaspoons of sugar every single day, one of the most insidious reasons for weight gain hides in plain sight. The numerous names sugar goes by confuses consumers that might believe ‘real cane sugar’ is healthier than processed syrups. Then there’s the ridiculous notion of juice cleansing, which only keep people’s sugar intake high while stripping valuable fiber from their diet.

If anything, this new report suggests that a trifecta of perception and lifestyle habits is possible: less fat shaming and a reorientation of body image; implementing a healthier diet with less sugar and carbohydrates; more thoughtful and intense movement. Factoring in individual genetics and the workplace and home environment is also necessary. No cure-all book or program is going to do the trick.

It’s not an easy path, but given the innumerable health problems associated with our growing waistlines it’s necessary, both as individuals and, during a time with an uncertain health care future, a society. Many elevated medical costs are avoidable when we place greater emphasis on obesity. There might be no one answer to this harrowing problem, but one thing is certain: giving up is a step in the wrong direction.

Meaningful pictures are assembled from meaningless noise.
Up Next
Surprising Science

There’s No Such Thing as Nothing, According to Quantum Physics

Theoretical physicist Lawrence Krauss explains why nothing is really something.