Isle Royale is an 893 square mile island in the northwest corner of Lake Superior, about a four-hour boat ride from Houghton, Michigan on the Keweenaw Peninsula. It’s a pretty rustic place with little development, and as such makes a fascinating isolated ecosystem for the study of the few species that live there, most significantly 1,600 moose and one or two wolves, interrupted only sometimes by visiting scientists or nature lovers. 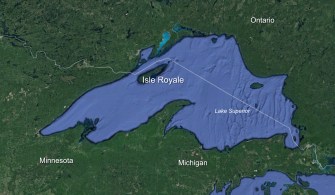 A team of ecologists from Michigan Technological University (MTU) in Houghton have recently released the first results of their study of Isle Royale moose as living, breathing manifestations of changing climate conditions.

Moose thrive in the cold, and while the Keweenaw continues to be frigid by human standards, with roughly 300 inches of snow per year, it’s not as cold as it once was. “The conditions you’re born into have a massive impact on not only how big you are but also how long you’re going to live,” says Sarah Hoy, a research fellow of MTU’s School of Forest Resources and Environmental Science. “This idea isn’t new — what we’re trying to do is establish how climate warming is affecting this iconic, cold-adapted species. We found evidence suggesting that moose experiencing a warm first winter tended to be smaller as adults and live shorter lives.” 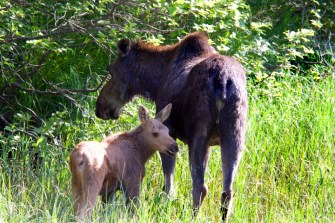 While the study presents clear biological evidence of continued warming in the area, there’s also an aspect of urgency to the findings given what’s happening to the moose population in nearby Minnesota over the last dozen years. Hoy explains, “The moose populations in northern Minnesota have tanked. Climate is considered a main driver, whether it’s direct through warmer winter temperatures causing heat stress and influencing the nutritional condition of moose, or indirectly by establishing more favorable habitat for white-tail deer.” That last point may be important because the moose are dying from a lethal brain worm parasite spread by deer whose population is expanding as a result of warming. 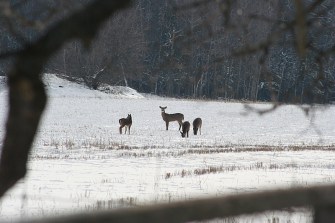 Meanwhile, the moose population on Isle Royale has been growing 20% a year for the past six years. There are no white-tailed deer there, and so that may be the differentiator since moose in both places are experiencing similar climate effects.

Still, if moose are smaller and live briefer lives, why is their island population growing to an unsustainable level? It likely has to do with the loss of wolves with whom the moose used to compete for prey. Their population was once around 50 during a time when wolves could reach the island on ice bridges that no longer form. The two last wolves are father and daughter, and in fact, a survey of the island in the summer of 2017 only found evidence of one of them, so there may be just one surviving as of this writing. 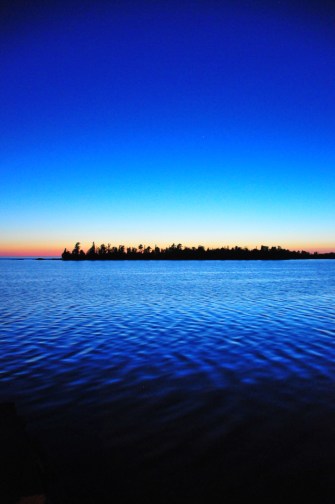 With wolves removed from the equation, the acquisition of sustenance has become significantly easier for moose, likely a bit too easy. This system out of balance has the moose population growing to an unsustainable level — already the western side of the island is denuded of spruce and grasses due to overgrazing. Some, such as ecologist John Vucetich suggest, “We’re likely looking at a population in transition, and the healthiest transition would almost certainly involve restoring wolf predation to Isle Royale.” The National Park Service is considering the idea, but remains unconvinced, since such interference in the Isle Royale ecosystem violates their “do not touch” scientific philosophy.

The island, once a perfect place to study nature undisturbed is now the opposite, an example of the kind of complex imbalances that are occurring as a result of climate change.

Related
The Past
The Wild West was lawless and chaotic — and the police helped keep it that way
Lawmen and outlaws were often the same people.
Thinking
6 great philosophers and how they used their political power
Most philosophers merely contemplate the world, but what about the ones who actually tried to change it?
Neuropsych
Asthma drug brings back “lost” memories
In a study involving mice, scientists used two different techniques — one optogenetic and one pharmacologic — to recover “lost” memories.
Stoicism: How to turn your sadness into strength
Chloé Valdary shares the ancient Stoic principle that can defeat modern despair.
▸
7 min
—
with
Chloé Valdary
Hard Science
3 new studies indicate a conflict at the heart of cosmology
The Universe isn’t as “clumpy” as we think it should be.
Up Next
The Future
Cars Parts Show Us How Some Genetic Stats Mislead
We can “read” genes with ease now, but still can’t say what most of them “mean.” To show why we need clearer “causology” and fitter metaphors, let’s scrutinize cars and their parts like we do bodies and genes.