A sub-mission, dubbed “RemoveDebris,” is included in the SpaceX Falcon 9 Dragon-14 mission, launched April 2 from Cape Canaveral, which has a number of research projects aboard.

RemoveDebris includes a main satellite, weighing 100 kg, and a pair of smaller “dummy” targets known as CubeSats, which can inflate like balloons to mimic the dimensions of an average object considered “space junk.” 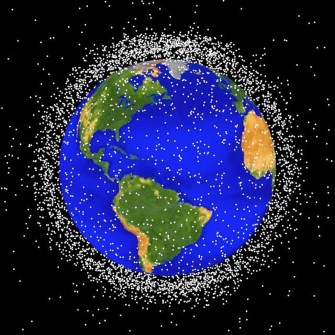 How big is the space junk problem? Beginning in 1957, humans have accumulated at least 7,000 satellites and 5,000 rockets in low Earth orbit. Sometimes these objects collide with each other, as well, producing even more space debris as the things break apart. It’s massive: The European Space Agency estimates 166,000,000 debris objects polluting Earth’s orbit as of January, 2017. Wow.

Some of them are careening around low Earth orbit at over 17,000 mph. Even worse, an object the size of a sugar cube can cause significant damage when it collides with a new satellite attempting to reach orbit.

It’s not the first time the idea has been conceived; researchers in China are working on a “Space robotic cleaner” that will be designed to clean up space junk and use it as fuel.

The project is spearheaded by the Surrey Space Centre of the University of Surrey in SE U.K. and will begin testing near the end of May, 2018.

Related
The Present
Climate change is altering the chemistry of wine
Smoke taint from wildfires is gross, even to wine amateurs.
13.8
Could a hidden variable explain the weirdness of quantum physics?
We have searched and searched but have never found one.
The Past
The Wild West was lawless and chaotic — and the police helped keep it that way
Lawmen and outlaws were often the same people.
Thinking
6 great philosophers and how they used their political power
Most philosophers merely contemplate the world, but what about the ones who actually tried to change it?
Neuropsych
Asthma drug brings back “lost” memories
In a study involving mice, scientists used two different techniques — one optogenetic and one pharmacologic — to recover “lost” memories.
Up Next
Surprising Science
Giant dinosaur tracks found in Scotland reveal the secrets of the Jurassic period
Scientists in Scotland find tracks of the largest animal that walked on Earth during the Middle Jurassic Period.