A massive stellar flare from Proxima Centauri, the closest star to our solar system, might have incinerated any hope that Proxima b, the star’s exoplanet, could support alien life.

In August 2016, astronomers announced the discovery of Proxima b, a rocky planet orbiting Proxima Centauri some 4.24 light-years from Earth. The exoplanet soon became a top candidate in the search for alien life because of its similarity to Earth: it’s rocky, has a similar mass, and has temperatures that could support liquid water.

But unlike Earth, Proxima b orbits a red dwarf, a class of dim stars prone to cataclysmic flares that are powerful enough to destroy atmospheres. Proxima b is also much closer to Proxima Centauri than Earth is to the Sun, meaning that a stellar flare would hit the exoplanet with 4,000 times more radiation than we typically receive from the Sun’s flares. 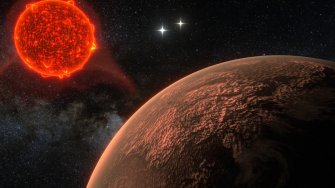 One team of astronomers believes a stellar flare has already ravaged the exoplanet.

The news comes from a reanalysis of a study published in the journal Astrophysical Journal Letters in November 2017. The original study, led by Guillem Anglada of the Institute of Astrophysics of Andalusia in Granada, Spain, outlined how the astronomers observed unusually bright light coming from Proxima Centauri in March 2017. Anglada’s team interpreted the light spike to be the result of a ring of dust,  similar to our solar system’s Kuiper Belt, that was scattering light in all directions.

But on February 26, 2018, another team of astronomers, led by Meredith MacGregor and Alycia Weinberger at the Carnegie Institution for Science, published a paper that questioned the original study. The new paper, also published in Astrophysical Journal Letters, showed how the Anglada team used calculations that averaged light measurements over a 10-hour period. Using different calculations, the team showed that the light spike occurred within a two-minute period. 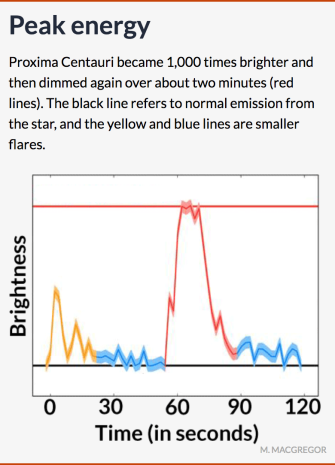 The best explanation? A stellar flare.

“It’s likely that Proxima b was blasted by high energy radiation during this flare,” MacGregor said in a press release, adding that astronomers have already observed that Proxima Centauri experiences smaller, X-ray flares. “Over the billions of years since Proxima b formed, flares like this one could have evaporated any atmosphere or ocean and sterilized the surface, suggesting that habitability may involve more than just being the right distance from the host star to have liquid water.”

Small dwarfs like Proxima Centauri are the most common type of star in our galaxy, and astronomers have identified multiple exoplanets orbiting in the habitable zones around them. But given the violent nature of dwarf stars, any life that exists on planets within the habitable zones would likely also face the additional hurdle of surviving intensely violent radiation, as MacGregor pointed out above. This factor could help astronomers better hone the search for alien life in the future.

Anglada and his team are currently reevaluating the findings in the original study, though he said the flare can’t account for all of the extra light, according to Science News.

This puts a slight dampener on Michio Kaku’s enthusiasm for sending postage-stamp-size spaceships to Proxima b:

Related
Neuropsych
Daily caffeine intake temporarily alters your brain structure
Compared to people who took a placebo, the brains of those who took caffeine pills had a temporarily smaller gray matter volume.
Thinking
Why you should laugh at yourself, according to Seneca and Nietzsche
“It is more human to laugh at life than to lament it.”
Hard Science
The violence of the Tonga eruption is a wake-up call to watch other submarine volcanoes
Out of sight, but not out of mind.
The Present
How circular economics can make us happier and less stressed
Entrenched business wisdom says that community-led economic systems are pure fantasy. Douglas Rushkoff disagrees.
The Learning Curve
The art of asking the right questions
The right questions are those sparked from the joy of discovery.
Up Next
Personal Growth
Is God really dead? Nietzsche, Bertrand Russell and Christianity
Friedrich Nietzsche is an influential thinker, but he is not without critics. One of the best of them is British philosopher Bertrand Russell.