Picture this: you’re playing basketball after school with your friends. Just as you’re about to make a three pointer, a streak of fire cuts across the sky and the object causing it lands just a few yards away, embedding itself in the blacktop. You rush over to the site of a small, smoldering crater, where a meteorite appears. And that meteorite is carrying biological material from another planet. This might sound like the opening scene to the next big sci-fi thriller. But it actually occurred in real life.

Two meteorites, one found outside of Morocco and the other in Texas, both in 1998, have now been analyzed and the results are enticing. An international collaboration of scientists at the Department of Energy’s Lawrence Berkeley National Laboratory (Berkeley Lab) conducted the analysis. Their findings were published in the journal Science Advances.

These space rocks, which are thought to have circulated within our solar system’s asteroid belt for a billion years, contain organic compounds necessary for life. The meteorites carry within them hydrocarbons, amino acids, and other organic materials, as well as water. It’s a bit like a life starter kit. 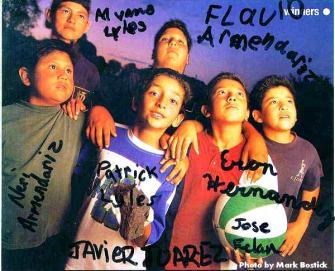 These boys were playing basketball when a meteorite blasted into the blacktop just yards away from them. This occurred in Texas on March 22, 1998. After studying it closely, scientists say the meteorite contains traces of water and prebiotic elements. (Credit: Mark Bostick).

Researchers took a look at minute blue and purple salt crystals from inside the meteorites, each just a fraction of the width of a human hair. These were transported to a dust-controlled room and handled with tiny instruments which resemble metal dental picks. Next, the crystals were examined with an X-ray microscope. Scientists also employed a technique known as XANES: X-ray Absorption Near Edge Structure Spectroscopy. Lo’ and behold, traces of prebiotic compounds and water were trapped inside these crystals.

It’s possible they originate with Ceres–a dwarf planet which also happens to be the largest object in the asteroid belt. Ceres has volcanic activity similar to Enceladus, which strengthens the case for some kind of life taking shape underneath the surface of Saturn’s frozen moon.

Such volcanic activity could force ice and water jets to shoot out into space. The asteroid Hebe is another candidate. This is a common source of meteorites that fall onto Earth. Or the crystals may have originated in “a water-rich world in the outer solar system,” as scientists write in the study.

This is the first time a comprehensive exploration of the chemical makeup of meteorites has been conducted. The groundbreaking work is helping us better understand our early solar system and the composition of asteroids within it. Discovering such compounds after a long trek through space hints at a greater diversity of life in the universe than previously assumed. 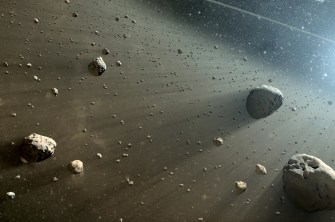 An artist’s conception of asteroids and space dust. Credit: NASA/JPL-Caltech.

An international team of scientists worked on this study. David Kilcoyne, of Berkeley Lab’s Advanced Light Source (ALS), was among them. “It’s like a fly in amber,” he said. Kilcoyne and colleagues say the water found within the crystals could date back 4.5 billion years, to when our solar system was born.

Planetary scientist and postdoctoral research associate Queenie Chan, of The Open University in the U.K., lead the study. She said in a press release, “We’re looking at the organic ingredients that can lead to the origin of life.”

Crystals hidden within meteorites increase the chances of biomolecules or even microbes making it to Earth or other planets. Although landing in very different locations, these particular meteorites showed evidence of an impact. They must have struck each other at some point, scientists say. Organic material could be passed through such an impact, a scenario astrobiologists hadn’t contemplated before. 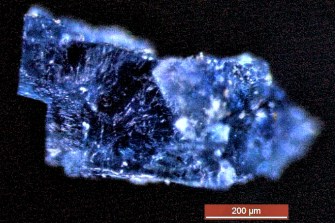 A blue crystal from the meteorite that fell near Morocco. The scale bar represents 200 microns (millionths of a meter). Credit: Queenie Chan/The Open University, U.K.

Yoko Kebukawa was a collaborator on this study. She is an associate professor of engineering at Yokohama National University in Japan. Kebukawa and colleagues applied a number of chemical experiments to the samples, to discover their makeup.

Chan said there are other crystals within these meteorites that haven’t yet been analyzed. That’ll consume a follow-up study. Kebukawa said, “We may find more variations in organic chemistry.” While Chan said, “Everything leads to the conclusion that the origin of life is really possible elsewhere. There is a great range of organic compounds within these meteorites, including a very primitive type of organics that likely represent the early solar system’s organic composition.”

Related
Starts With A Bang
The quantum reason why neutral atoms first formed
If it weren’t for the intricate rules of quantum physics, we wouldn’t have formed neutral atoms “only” ~380,000 years after the Big Bang.
Hard Science
Some earthquakes last for seconds, others for minutes — and a few for decades
What do you call it when the Earth shakes for three decades?
Sponsored
What childhood “money story” is shaping your financial behaviors?
Here are the signs that you inherited “money anxiety” from your parents.
The Present
The “maritime Indiana Jones” who salvages shipwrecks now wants to tow icebergs
Simple physics makes hauling vast ice chunks thousands of miles fiendishly difficult — but not impossible.
Neuropsych
Inside the brains of aging dogs
In a citizen science project, thousands of pet dogs are helping scientists to understand what happens to memory and cognition in old age.
Up Next
Health
The bilingual brain: Why one size doesn’t fit all
There is more than one type of bilingualism.