There are approximately 110 million anti-personnel landmines in the world, in more than 70 different countries. Many of these are in places no longer in conflict such as Angola, Cambodia, and Columbia, where communities have to live alongside these hidden agents of death. Globally, mines injure or kill around 20,000 people each year, many of them children. Unfortunately, mine clearance is difficult, dangerous, painstaking, and costly. I mean, who wants to step into a minefield and start poking around?

Shockingly, clearance methods haven’t changed very much since the Second World War. A team of scientists from Hebrew University in Jerusalem are changing that. They’ve fabricated a unique method which by all measures leapfrogs the current one. It’s less dangerous, less difficult, and less expensive. In a study published in the journal Nature Biotechnology, researchers developed a technique using lasers and glowing bacteria to accurately map minefields.

This is a precision, remote strategy, developed by Prof. Shimshon Belkin, who genetically engineered the bacteria to luminesce. One can pick up the fluorescent glow using a laser, making the system remarkably accurate. The key is that landmines naturally leak DNT vapors from the explosive they use, TNT. 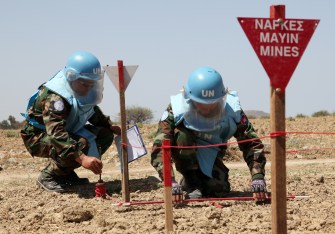 DNT gathers in the soil above the anti-personnel device. The idea for this system began when, in the course of previous research scientists noticed that certain plants glowed when they came into contact with DNT vapor. Researchers in this study genetically engineered a strain of bacteria to respond just like those plants, glowing fluorescent green when they detected DNT.

Hebrew University scientists stuffed 100,000 of these bacterial cells into a multitude of tiny, polymer beads made from a certain kind of seaweed. The beads were then spread over a minefield. Researchers returned 24 hours later. Using a laser from 20 meters (approx. 66 ft.) away, they found they could accurately map the landmines’ locations.

This method was tested successfully on two different landscapes, one of sand and another soil. Researchers say this is the first landmine detection system that is reliable, while taking the human aspect and thus the danger, out of the equation. Since the initial two tests, Prof. Belkin and colleagues have shortened the activation period. Now, it only takes about three hours to be able to detect landmines with this method.

“Our field data show that engineered biosensors may be useful in a landmine detection system. For this to be possible, several challenges need to be overcome, such as enhancing the sensitivity and stability of the sensor bacteria, improving scanning speeds to cover large areas, and making the scanning apparatus more compact so it can be used on board a light unmanned aircraft or drone.”

This was a preliminary study. More research will have to be done before its field worthy. But someday, a larger system, including drones and robots to remove the mines, could take humans and thus the danger, out of the equation. This all while healing the landscape, freeing up territory for farming or enterprise, and saving civilians from these menacing reminders of conflicts past. Three years ago, Belkin said that other bacteria could be used to detect pollutants in water, which means that a similar method may be applied to cleaning up ecological disasters and pollution, as well.

To learn what role genetic engineering bacteria will have in saving the planet, click here:

While most participants fibbed a little bit, laptop users were much more likely to lie – and by a lot more.
Up Next
Strange Maps

Mapping the World’s Biggest Weapons Exporters – and their Best Customers

Together, Russia and America sell almost 60% of all weapons traded around the world.