ISIS has taken over cable news.

“If you’ve been watching television for the last month, all you have been seeing, all you have been hearing about is these guys with masks or black flags who are potentially coming to get you,” President Barack Obama recently told NPR.

Based on graphs made by The Intercept, which tracked the number of times CNN, MSNBC, or Fox News mentioned the word “terrorism,” “ISIS,” “climate change,” “poverty,” or “CISA,” the news has been saturated with talks about terrorism and ISIS far more than the other issues. 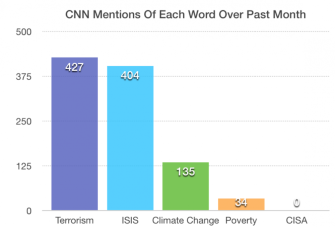 But when we consider which of these issues poses the most risk, we should be talking more about climate change. It’s not a big story on every station because it’s not a snappy, sexy story. “And climate change is one that is happening at such a broad scale and at such a complex system, it’s a hard story for the media to tell on a day-to-day basis,” Obama told Vox.

This kind of coverage may lead people to believe ISIS is deadlier than climate change, skewing the public’s priorities. The threat of terrorism is direct and short term, according to political scientist Dr. Michael McKoy. Climate change, on the other hand, is “a much greater long-term threat.”

There is a cascade of events the CDC has laid out that will impact U.S. public health, which may “be affected by disruptions of physical, biological, and ecological systems, including disturbances originating here and elsewhere.” 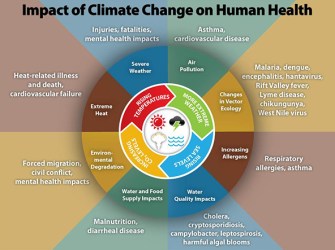 I can feel some people’s eyes glaze over. It’s the same deal with Edward Snowden and privacy issues. But when you frame this issue in the context of the government looking at your naughty photos, as John Oliver did, people lean in to listen.

Climate change needs to feel personal, says Administrator of the EPA Gina McCarthy. “It’s extremely important to recognize your own limitations about who you’re good at talking to and who’s going to believe you and who are the people you are trying to influence listen to.”

McCarthy expresses how important it is to talk about these issues on local levels, explaining how her team has concentrated on talking to faith leaders to spread the word to congregations. It’s just as vital that these conversations happen on the local level if climate change is going to become a serious conversation. We’ve seen first-hand how plans to set up renewable energy in a small town can be undone by a few misinformed locals.

On a national scale, Obama told NPR that “the Republican Party in the United States is perhaps literally the only major party in the developed world that is still engaging in climate denial. Even far-right parties in other places acknowledge that the science shows that temperatures are going up and that that is a really dangerous thing we’ve got to do something about.”

Uruguay has 95 percent of its electricity coming from renewable energy. This change in infrastructure wouldn’t have been possible if a commitment to change wasn’t endorsed across Uruguay’s political parties.

When justice isn’t tempered by something such as mercy, forgiveness, or nonviolence, efforts to make society more equitable often backfire.
Up Next
Culture & Religion

How much is a copy really worth?