It’s long been known that apes and humans share a common ancestor, but not a lot is known about what that ancestor was and where it came from. The fossil record for the Miocene epoch in which it’s expected to have lived is mostly comprised of teeth and jawbone fragments. But now, the discovery of a remarkably complete skull of an infant ape is providing unprecedented insight into our ancient common ancestor, and thus, an early look at our own evolution. The research, partially funded by National Geographic, was published August 10, 2017 in Nature.

Much of the information the lemon-sized skull has provided scientists is the result of highly sensitive 3D X-ray imaging performed by the European Synchrotron Radiation Facility (ESRF) in Grenoble, France. The scans revealed unerupted teeth, the brain cavity, and bony inner ear tubes.

Fossil KNM-NP 59050 was found by in the Napudet area, west of Lake Turkana in northern Kenya. The area was being explored by a team from the Turkana Basin Institute’s De Anza College led by Isaiah Nengo. (The school is affiliated with Stony Brook College in the U.S.)

Expedition assistant John Ekusi discovered the fossil as he broke off from the team to smoke a hand-rolled cigarette. Others watched from a distance, intrigued, as Ekusi began circling something on the ground that had obviously caught his attention. His initial thought was that the rounded fossil poking through the dirt was an elephant femur. As the team realized what it really was, night was falling, so, after a bit of celebratory dancing, they reburied it until morning. As Nengo recollects, “I tell you, nobody was sleeping that night.”

KNM-NP 59050’s snout shape suggests it could have been a prehistoric gibbon, but the structure of its inner ears says otherwise. As Fred Spoor of University College London and the Max Planck Institute of Evolutionary Anthropology told Phys.org, “Gibbons are well known for their fast and acrobatic behavior in trees, but the inner ears of Alesi show that it would have had a much more cautious way of moving around.”

Its unerupted teeth placed the skull in the genus Nyanzapithecus as the first member of a brand-new species: Nyanzapithecus alesi. Prior to this find, Nyanzapithecus were known only by bits of tooth, and it wasn’t even clear that they were in fact apes. Again though, the fully developed bony inner ear tubes in KNM-NP 59050 — a trait also seen in today’s apes — provided the critical link. 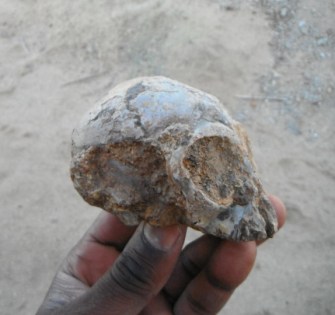 The tiny Alesi skull is 13 million years old. Craig S. Feibel of Rutgers University-New Brunswick says, “A nearby volcano buried the forest where the baby ape lived, preserving the fossil and countless trees,” adding, “it provided us with the critical volcanic minerals by which we were able to date the fossil.”

“Nyanzapithecus alesi was part of a group of primates that existed in Africa for over 10 million years,” Nengo says, adding, “What the discovery of Alesi shows is that this group was close to the origin of living apes and humans and that this origin was African.”

Here’s ESRF’s video about the discovery of Nyanzapithecus alesi.

We confidently state that the Universe is known to be 13.8 billion years old, with an uncertainty of just 1%. Here’s how we know.
Up Next
Sex & Relationships

Spontaneous talk on surprise topics. Comic Ari Shaffir talks about outrageousness in comedy, bipartisan e-rage on social media, and growing up and growing out of bad habits.