At the February 5, 2015 meeting of the Brain Research through Advancing Innovative Neurotechnologies initiative in Bethesda, Maryland, Christof Koch, president of the Allen Institute for Brain Science in Seattle, announced something truly startling: His team as identified three previously unnoticed neurons reaching from the an area called the claustrum into both the left and right brain hemispheres, and a massive one that wrapped around the circumference of the entire brain like, in Koch’s words, a “crown of thorns.” The team suspects these neurons may constitute nothing less than the pathways that produce consciousness. Certainly the announcement of a single, entire-brain-encompassing neuron is shocking all by itself.

The claustrum is a small, thin sheet of cells that researchers have been considering as a potentially critical area of the brain for some time. It’s tucked into the neocortex at the center of the brain. 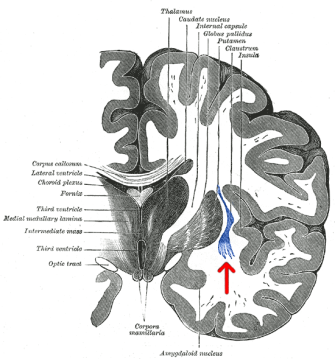 Known to communicate with most of the cortex, the claustrum is believed to be involved in higher-cognitive functions like language, sensory input processing, and long-term planning. A paper co-authored by Koch with Francis Crick in 2005 referred to the claustrum as a potential “conductor of consciousness.” These newly identified neurons may be part of that mechanism.

The project incorporated genetically engineered mice whose claustrums contained specific genes that activated in response to a certain drug. When the drug was fed to the mice, these genes produced a green fluorescent protein developed by the late Roger Tsien the team could photograph in 10,000 cross-sectional images that they then stitched together in a computer application to produce their 3D model of the three glowing neurons.

This is not the Allen Institute’s first experience with 3D modeling, having announced in October 2016, for example, that they’d mapped the entire mouse cortex in “true three dimensions.” The Allen Institute’s Lydia Ng noted at the time, “Annotating the cortex in three dimensions was no small task. It required the expertise of both technologists and anatomists working closely and for many long hours to generate the data.”

Koch suggests now that the “crown of thorns” around the brain could mean the claustrum is coordinating the input and outputs of various areas of the brain, uniting the entire system in consciousness. Moving forward, his team plans to continue mapping neurons originating in the claustrum to see where they may lead.

And, of course, other neuroscientists must be rolling up their sleeves as you read these words, eager to find out if similar — and previously unnoticed — neuronal structures also exist in our human brains.

When should we seek justice, and when should we forgive? A bishop explains.
▸
5 min
—
with
Bishop Barron
Up Next
Hard Science

Elon Musk announces that SpaceX will fly two private citizens on a mission around the moon in 2018.