There’s a trend in sociology within the last century or so, arguing for or against what’s known as the Intuitive Belief Hypothesis. While psychology has been contributing to the debate only for the last two decades. The thinking is that religious thought is intuitive, non-analytical, and so our natural thought pattern. As we get more analytical we get less religious, the hypothesis states.

This recent Oxford and Coventry University study however denies the hypothesis, saying that we’re not naturally inclined to spirituality. Instead, religious believe they contend, is attached neither to analytical nor intuitive thinking. Instead, it originates from the nurture side of human experience, through upbringing and socio-societal connections. Researchers conducted three separate studies to reach these conclusions. Their findings were published in the journal Scientific Reports.

Previous research has found that those who hold strong religious beliefs are more intuitive. But once they acquire more analytical thinking patterns, their ferventness lessens or drops off. Two of the three were pilgrimage field studies.

Researchers evaluated those walking the Camino de Santiago, or the “Way of St. James.” This journey entails traversing a system of medieval walking paths starting at the French Pyrenees Mountains and terminating in northwest Spain at the cathedral of Santiago de Compostela. This is thought to be the final resting place of St. James. The trek takes 30 days to complete. The third study was a neurostimulation experiment, performed by scientists at Oxford. 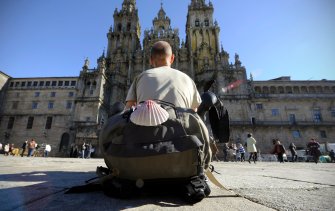 A pilgrim rests in front of the Santiago de Compostela in northwest Spain. Credit: Getty Images.

Previous studies focused on analytical thinking, researchers point out. Here, they decided to evaluate what role intuition plays in spirituality. Previous work also used a “culturally limited sample,” mostly US and Canadian college students. This one drew from a diverse population.

Other work also assumed that “intuitive-analytical systems work together in a hydraulic-like way,” as this study’s authors wrote. “This might explain the evidence suggesting that supernatural beliefs might coexist with logical, scientific knowledge, or why studies of tribal societies have depicted the existence of rational, instrumental thinking alongside supernatural ideas and rituals.”

There have been some studies too showing that some religious people can hold spiritual and analytical thoughts in their mind simultaneously. So rather than polar opposites, these researchers found that intuition and analytical thinking may operate as “two minds in one brain.” Supporting this, brain imaging studies have discovered that while logical reasoning emanates from the right prefrontal cortex, religious belief stems from another region, the ventral medial prefrontal cortex.

In the first study, lead author Miguel Farias and colleagues employed a probability bead game to evaluate 89 pilgrims of varying ages (16-67), nationality, and religious belief. The game forces one to select either a logical or intuitive choice. Afterward, participants were evaluated on religiousness by asking, “How religious/spiritual do you consider yourself to be?” They also reported how long they were on the pilgrimage for. Researchers took the results of the game and participants stated religiosity and looked to see if higher levels of intuitive thinking lined up with religious or spiritual belief. 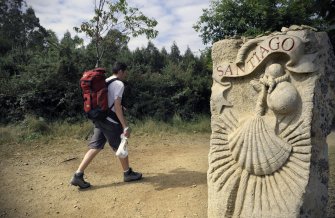 The second study used the same model, only instead of a bead game, they gave participants mathematical puzzles where intuition would allow them to quickly find the answer. Again, no link between spiritual belief and intuitive cognition. In the third and final part, transcranial direct current stimulation (tDCS) was used. This is using low-level electrical current used to stimulate the brain in a certain way.

A painless procedure, electrodes are placed on the scalp and deliver current in a way that either improves communication between brain regions, or suppresses particular regions for certain desired effects. Here, tDCS was used to increase cognitive inhibition—the ability to inhibit unwanted thoughts or behavior. Doing so also suppresses analytical thinking.

Neuroscientists in addition activated the right inferior frontal gyrus, the brain region which controls inhibition. The idea was that, shutting down logical, analytical parts of the brain might stimulate intuition. A previous study found that this latter region was employed by atheists to block out spiritual feelings. 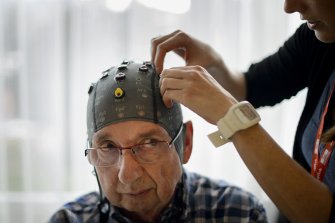 Nine volunteers, recruited from the general public, took part. They were all between the ages of 18 and 64. A little over 58% were women. No participant had any change in their religious or spiritual views as a result of neurostimulation.

Dr. Farias said of the findings, “We don’t think people are ‘born believers’ in the same way we inevitably learn a language at an early age.” Instead, “what we believe in is mainly based on social and educational factors, and not on cognitive styles, such as intuitive/analytical thinking.” As a result, “Religious belief is most likely rooted in culture rather than in some primitive gut intuition.”

So if it’s not a natural inclination, why have we humans created spirituality and religion? This video may lend some answers:

Related
Hard Science
Some earthquakes last for seconds, others for minutes — and a few for decades
What do you call it when the Earth shakes for three decades?
Sponsored
What childhood “money story” is shaping your financial behaviors?
Here are the signs that you inherited “money anxiety” from your parents.
The Present
The “maritime Indiana Jones” who salvages shipwrecks now wants to tow icebergs
Simple physics makes hauling vast ice chunks thousands of miles fiendishly difficult — but not impossible.
Neuropsych
Inside the brains of aging dogs
In a citizen science project, thousands of pet dogs are helping scientists to understand what happens to memory and cognition in old age.
Neuropsych
The most common source of awe might surprise you
It’s us.
Up Next
The Present
There’s No Moral Difference between a Wall and a Migrant Visa
Coercion requires justification. How can we justify the invisible walls of our visa policies?