The first clue appeared in 2016, when researchers found that water, ammonia, and methanol ice — the kind found in interstellar clouds where stars form, and in comets — could contain a range of molecule types, including ribose, a precursor of RNA. One of the great mysteries surrounding the origin of life on earth is the question of where its life-starting RNA came from. Maybe this meant it could have come from space, but some were skeptical: Was the ribose found in the ice a natural occurrence, or just lab contamination? Now a new study of ice’s weird behavior under space-like conditions answers that question: Ribose happens. 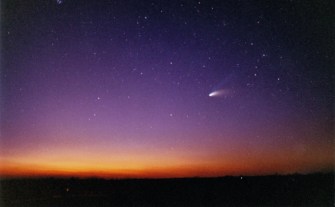 The new study, from a team led by Shogo Tachibana of Hokkaido University, was published in the September 2017 issue of Science Advances. It presents their findings of what happens to ammonia/methanol ice when subjected to ultraviolet radiation — standing in for starlight — and sub-zero temperatures from ‒263° C to ‒258° C — standing in for space. What they found is a bit weird. Two thermal sweets spots at which the ice behaved unexpectedly:

Below -213° C, the ice was a brittle solid, but at -206°, it began to form bubbles. “We were so surprised when we first saw bubbling of ice at really low temperatures,” Tachibana tells ScienceNews. “It is like bubbling in champagne.”

The researchers saw spikes in hydrogen readings as they irradiated the ice, suggesting the bubbles were made of hydrogen split away from the ice’s ammonia and methane molecules by the ultraviolet light to which the ice had been exposed.

Even more surprising, as the temperature was brought up to -185° C, something else happened: The bubbly ice semi-liquified, becoming oozy like frozen honey. This persisted up to -161° C, at which point it solidified again. The bubbles nonetheless persisted up to -123° C, at which point the ice turned crystalline. Seeing space-ice ice in this liquid-like state supports the possibility of chemical interactions occurring within in it. 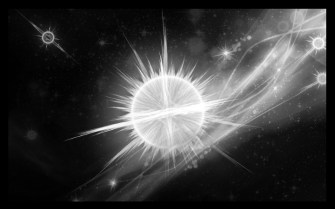 Cornelia Meinert was one of the authors of the earlier research that found ribose, and she sees the new study as evidence for what her team found, telling Science News that it strengthens her conclusion because “at this very low temperature, the small precursor molecules can actually react with each other. This is supporting the idea that all these organic molecules can form in the ice, and might also be present in comets.”

It may just be that life on earth began, in a sense, on chunks of ice spinning across the galaxies.

St Nick had a history of teleporting long before needing to reach all the world’s children in one night.
Up Next
Sex & Relationships

A number of US jurisdictions are starting to keep animal abuser registries, sparking a debate.