Every time I hear that song “Talk to the Animals,” I role my eyes. Now it seems the concept behind Dr. Doolittle may not be so far-fetched, after all. Take human languages for instance. There are 6,906 of them, and around 250 language families. Each one contains grammar and syntax. But in many instances linguists tell us, they’re surprisingly similar.

What’s more, ours aren’t the only sounds in the animal kingdom to observe a style of grammar. Bird song for example, has a grammar to it. Research is now finding that the sounds made by humans, birds, and many other animals may have a common origin. This hints at a “universal grammar,” which exists across a wide swath of vertebrates. The findings have implications not just for linguistics but music, computer science, and more.

Scientists believe it all comes down to common circuitry inside the brain. Imagine bird song, human speech, and music all emanating from common jumbles of neurons firing in particular patterns. Scientists who study bird song have suspected this for some time. But now, researchers at McGill University in Montreal, have provided the very first evidence for it, and it’s compelling. Their findings were published in the journal Current Biology.

This series of studies was based on current theories linguists have surrounding human languages. They also concern music. It seems there are commonalities which are the same throughout the kaleidoscope of human tongues. These have been dubbed “universals.”

They surround syntax or the order words go in. But this also includes things like word stress, pitch, and the timing speech occurs in. Some linguists, including left-wing dissident Noam Chomsky, have proposed a “universal grammar,” which learning a language is built on. It’s nature vs. nurture all over again. So are we predisposed to certain grammatical structures or are they learned? 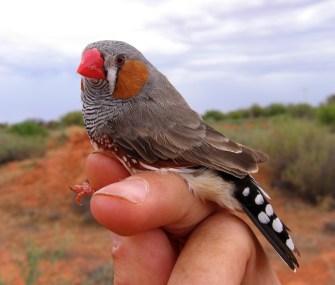 Investigators used zebra finches for their research. These are commonly used in birdsong studies. Logan James is a PhD student at McGill and the study’s co-author. He said, “Because the nature of these (birds’) universals bears similarity to those in humans and because songbirds learn their vocalizations much in the same way that humans acquire speech and language, we were motivated to test biological predisposition in vocal learning in songbirds.”

Jon Sakata was the study’s senior author. He’s an associate professor of biology at McGill. He said that zebra finches are found to favor particular arrangements over others. “These sound patterns resembled patterns that are frequently observed across human languages and in music,” he said. Sakata and James performed a number of experiments to test whether these patterns were a learned behavior or somehow inherent to the birds.

They took juvenile zebra finches at the age when they first begin to learn their songs, and tutored them in a number of different arrangements. Zebra finches are known to display a wide variety of sounds. And yet, they generally rely on certain kinds, what researchers call “acoustic elements” or “syllables.” These are then arranged in particular and often repeated patterns. 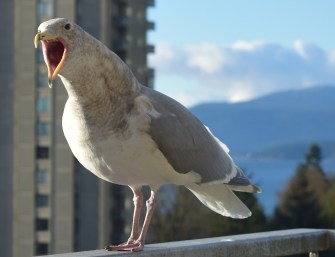 Birds repeat certain calls and arrange the “syllables” of them in particular ways. Credit: Visionary 111, Pixababy.

There are five different elements or syllables common to these finches. The birds were taught every possible sequence they could go in. Since the finches weren’t taught the songs they would learn in the wild, they had an equal chance of picking any of the patterns learned.

In other words, they had to choose for themselves what order to place the syllables in. The results were that they chose songs remarkably similar to those zebra finches in the wild produce. For instance, they automatically did what’s known as a “distance call.” This is a long, low-pitched sound. In other songs, higher-pitched sounds were more likely to come in the middle, rather than at the beginning or end.

Interestingly, song writers do the same thing, using longer, lower-pitched sounds in the beginning and end of musical phrases, while quicker, high-pitched sounds often occur in the middle. Researchers wrote that “Zebra finches spontaneously produced acoustic patterns that are commonly observed in speech and music, suggesting that sensorimotor processes that are shared across a wide range of vertebrates could underlie these patterns in humans.”

Sakata and James concluded that statistical learning or how much one is exposed to acoustic patterns, cannot solely account for the development of birdsong or speech patterns. That means several species, from songbirds to human babies, are hardwired to prefer certain sounds and patterns.

This discovery offers many new avenues for future research. Sakata said, “In the immediate future, we want to reveal how auditory processing mechanisms in the brain, as well as aspects of motor learning and control, underlie these learning biases.”

Such findings could lead to a better understanding of our evolution and development, offer new insights into human speech, languages, and musical composition, give us a better grasp on the communication patterns of other species, and more. It may even help us perfect natural speech for future robots and A.I.

Related
Starts With A Bang
Ask Ethan: What are white holes, and do they really exist?
In General Relativity, white holes are just as mathematically plausible as black holes. Black holes are real; what about white holes?
Life
Strange life forms create an “alien” ecosystem in an abandoned uranium mine
Slimy biofilms made up of bacterial and eukaryotic life forms have taken over an abandoned, flooded uranium mine in Germany.
Hard Science
Earth has an eerie “sodium glow,” and astronomers use it to image stars
Air currents in our atmosphere limit the resolving power of giant telescopes, but computers and artificial stars can sharpen the blur.
Health
How saliva changes the flavor of food
“It’s a liquid, but it’s not just a liquid.”
High Culture
Why are flood myths so common in stories from ancient cultures around the world?
Could the prevalence of flood myths around the world tell us something about early human migration or even the way our brains work?
Up Next
Surprising Science
Can Psychedelics Make Us More Content?
Recent research in psilocybin, LSD, and MDMA, which all affect our serotonin receptors, suggest these substances can help make us content.