How does life bounce-back after an extinction-level event? Researchers are studying how the therapsid Lystrosaurus survived through one of the “Big Five” extinction events. It may help scientists predict how Earth will bounce-back from the mass extinction we’re witnessing today.

Throughout Earth’s history there have been five catastrophic crises. These events are characterized by their sudden and dramatic changes in the biosphere, changes which happen far too quickly for many of the biological communities to evolve and adapt, yet, some manage to endure.

“The post-extinction recovery phases are as important as the mass extinctions themselves for understanding models of ecosystem regeneration and group diversification, particularly in the case of organisms that survive extinctions at low diversity before radiating extensively,” a group of paleontologists write from the National Museum, Bloemfontein in a new study published in Scientific Reports.

The researchers examined the persistence of the therapsid Lystrosaurus, who lived before and after the Permian-Triassic Mass Extinction. The cause of this catastrophe is uncertain, as it occurred over 250 million years ago. The geological record that would indicate what kinds of changes took place are buried under many layers of rock. Some groups propose there was an asteroid impact and many volcanic eruptions. Other groups believe sea level change and a deficiency of oxygen may have triggered this mass extinction event. Whatever happened there are lots of fossils to indicate many things died during this time. 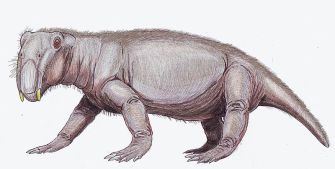 Through all this the Lystrosaurus endured. The researchers assert a shortened lifespan coupled with reproducing at an earlier age might explain the persistence of the therapsids “in the unpredictable, resource-limited Early Triassic environments, and help explain observed body size distributions of some disaster taxa.” The Lystrosaurus before the extinction event was about the size of a pygmy hippo and after, due to a shorter lifespan and earlier reproduction, shrank to the size of a large dog.

“Before the Permo-Triassic extinction, the therapsid Lystrosaurus had a life span of about 15 years based on the record of growth preserved in their bones,” said National Museum paleontologist Jennifer Botha-Brink, the lead author on the paper. “Yet, nearly all of the Lystrosaurus specimens we find from after the extinction are only 2-3 years old. This implies that they must have been breeding when they were juveniles themselves.” 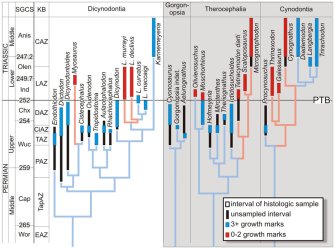 From: Breeding Young as a Survival Strategy during Earth’s Greatest Mass Extinction

Scientists say we are witnessing a sixth mass extinction event, which has marked the currently debated new epoch entirely created by man: the Anthropocene. “With the world currently facing its sixth mass extinction, palaeontological research can help us understand how and why some animals, such as those like Lystrosaurus, thrived in the face of disaster,” said Botha-Brink. The study of past extinctions may help scientists today predict how species will react to the current climate crisis which is altering habitats faster than some can adapt to them.

How fast does the Earth move through the Universe?

Image credit: NASA, ESA Acknowledgements: Ming Sun (UAH), and Serge Meunier, of a galaxy speeding through the intergalactic medium.And if relativity tells us there’s no such thing as “absolute motion,” […]