The first effective anti-retroviral treatment for HIV, Azidothymidine (AZT), was approved for treatment in 1987. But HIV is highly prone to mutations and thus likely to develop drug resistance. It wasn’t until researcher David Ho thought to combine three different anti-retrovirals, in what is called a Highly Active Antiretroviral Treatment (HAART) cocktail, that AIDS became a truly controllable disease. Below, Ho talks about the “eureka moment” that led his team of researchers to develop HAART.

The HIV virus contains strands of RNA genetic material packaged along with a protein called Reverse Transcriptase. When HIV infects a T-cell (the white blood cells that normally protect the body against cellular invaders), it unloads its RNA into the T-cell. There the Reverse Transcriptase reads and transcribes the single-stranded RNA nucleotide bases into double-stranded viral DNA. Then another protein called Integrase fuses that viral DNA into the cell’s genome. That infected DNA is later transcribed back into viral RNA, which is translated into virus proteins. The protein Protease cuts up and packages these proteins into new viruses that rupture from the cell and spread the infection. 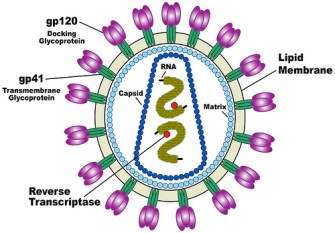 There are three major classes of drugs that combat HIV at various stages of infection. Today, an effective HIV cocktail therapy will include three or four different types of the following drugs, but the exact regimen varies from person to person.

1. Nucleoside Analog Reverse Transcript Inhibitors (NRTIs) – These drugs, including AZT, disrupt reverse transcription, thereby preventing viral DNA from being created. NRTI’s have a similar chemical structure as deoxynucleotides, the building blocks of DNA, and they compete with these naturally-occurring deoxynucleotides to be incorporated into the growing DNA chain during reverse transcription. But when an NRTI is incorporated into viral DNA, it terminates the production of that DNA strand, halting viral DNA synthesis.

2. Non-Nucleoside Reverse Transcript Inhibitors (NNRTIs) – These drugs, like NRTIs, halt viral DNA synthesis, but they do so through a different mechanism. NNRTIs target the Reverse Transcriptase enzyme itself, preventing it from transcribing DNA and thereby barring the virus from infecting the cell’s genome.

3. Protease Inhibitors (PIs) – Pioneered for use in HIV patients by Ho, these drugs act on cells that have already been infected by viral DNA. PIs inhibit the protein Protease, which is required to produce and package new viruses that emerge from an infected cell and can attack other T-cells.

The Brain Plaques and Tangles That Cause Alzheimer’s Disease

The disease seems to develop as beta amyloid plaques and neurofibrillary tau tangles gather inside the brain to clog synapses and nerve cells—but what is its root cause?