Spanish psychoanalyst Constanza Michelson is arguing, in a provocative piece at the Huffington Post España (Spanish), that women’s struggle for sexual equality has actually made them sexual slaves.

Ironically, the more women have tried to free themselves from masculine norms of sexuality, the more they have adopted male sexual tendencies under the guise of sexual liberty.

After our struggle to escape from the macho norm, we’ve run into something curious and symptomatic: We’ve transformed ourselves into a masculine fantasy, that is to say, a free piece of ass.

Of course that is not what women choose to call it, preferring names like free love and multi-orgasmic, but these concepts are rooted in male sexual tendencies and masculine biological phenomenon. 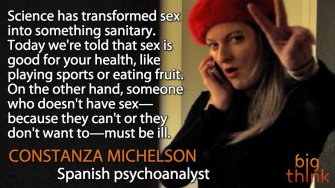 While women fight for parity with men in areas like worker compensation, Michelson argues that women should claim a sexual identity that is separate from men’s. In the name of sexual liberation, women have compromised on sexual values such as closeness, caressing, and pillow talk.

Michelson is on guard against appearing nostalgic or a defender of conservative values. Sometimes the freedoms we are promised, she argues, become new forms of slavery.

Referencing the late 20th century French thinker Michel Foucault, Michelson reminds women that to say “yes” to sex doesn’t mean saying “no” to power. It’s not a matter of defending old institutions, she says, but our “touch and go” approach to sex “trivializes the body, mechanizes sex, and undermines the possibility of an encounter.”

We evolved to be kind – and die for others.
▸
4 min
—
with
Paul Bloom
Up Next
Personal Growth

The Tao of Selma (or, the Problem with Productivity)

The trouble with productivity as a value is that it treats a morally ambiguous act as a moral good. What, specifically, do we want to be producing more of?