NOTE: This article discusses plot points from the movie Arrival.  Spoilers ahead!

The language we speak can help us see the future.

That’s the premise of the alien language in the movie Arrival — and it’s a big deal. Arrival is a movie where aliens arrive on Earth to talk to us. Unlike typical alien invasion movies that focus on explosions and punching, Arrival focuses on a linguistics professor teaching the aliens English while learning their language. What the professor learns is that speaking the alien language reshapes her brain to let her see into the future. 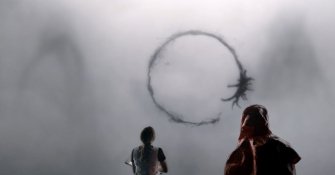 Fictitious as that science sounds, language might really do that.

First, learning a language makes you smarter. As we’ve told you before, learning a language improves your brain’s executive functions. That means your ability to switch focus between tasks, recall memories, and solve problems gets better by learning a language. The reason why is the critical period hypothesis, where “children learn languages more easily because the plasticity of their developing brains lets them use both hemispheres in language acquisition, while in most adults language is lateralized to one hemisphere – usually the left,” according to educator Mia Nacamulli. Here’s a video of her explanation:

Second, Time isn’t really linear. In fact, according to neuroscientist David Eagleman, time is really just “your assessment of how long something took.” George Musser verifies that in Scientific American, writing“our minds construct the past, present, and future.” He continues, citing “memory researcher Endel Tulving, who called our ability to remember the past and to anticipate the future “mental time travel.” He cites a 2007 study where participants were asked to remember something from their past and imagine a future scenario under an fMRI scan. The same areas of the brain lit up for both, meaning “that memory is essential to constructing scenarios for ourselves in the future,” reports Scientific American.

Time can also feel faster or slower depending on how we experience it. “When you’re in a life threatening situation, your brain writes down memory much more densely,” Eagleman told us. “Retrospectively, when you look at that [memory], you have so many details that you don’t normally have that it seems as though it must have lasted a very long time.” He explained more about that in the studio:

Third, the language you speak shapes the culture around you. Or, as Discovery News puts it, “Language doesn’t determine how you think, but it can determine how you think about things.” That means “people from different cultures diverge according to “patterns of metaphor” within language,” as Phillip Perry explained for us. Namely, different cultures emphasize different aspects of experience through the words they choose to speak. For example, the cliché of Eskimos having many words for snow is rooted in a linguistic truth: native Americans who speak Inuit and Yupik languages use different words to describe snow depending on its location, texture, movement and other factors. English speakers take the opposite approach, using the word “snow” to describe a myriad of weather conditions, textures, and chemical states. In short, snow is not a singular concept to Inuit speakers the way it is to English speakers, MentalFloss explains. Defining snow with such specific language grants it multiple meanings, and those multiple meanings increase its significance within the culture of the people using the language.

Combine all of those factors and you’ve got a way of viewing the world that expands your brain, sees beyond the linear bounds of time, and recreates your culture. Just like in Arrival. It’s also a great way of understanding our relationship to time, as Ted Chiang, author of the story that inspired Arrival, told NPR “a good explanation is not just useful. It can also be beautiful.”

Hopefully, this has been such an explanation.

Cats know more than they let on.
Up Next
Culture & Religion

The Largest Air Purifier in the World Opens in Beijing

More than 80% of people living in urban areas that monitor air pollution are exposed to air quality levels that exceed the World Health Organization (WHO) limits. It gets even worse if you look at low and middle-income countries, where 98% of cities don’t meet WHO guidelines.