You have to wonder if this wasn’t a solution in search of a problem. Facebook has just announced that, unless you opt out, they’ll be automatically tagging you any time you appear in someone’s photo so that no one can use your face as their profile picture. (An issue probably only really attractive people have.) “Now, if you’re in a photo and are part of the audience for that post, we’ll notify you, even if you haven’t been tagged.” Part of what makes the rationale so silly is that if you’re not part of the audience for the post, you won’t be notified — so you can still steal someone’s face as long as they’re not your Facebook friend. 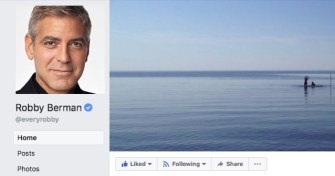 They do also offer a more credible rationale: Letting the visually impaired know who’s in newsfeed pictures. Still, both reasons feel a bit like window dressing.

You have to wonder what else is being done with Facebook’s facial recognition database? Is the platform making demographic assumptions/predictions based on our facial characteristics? Are they sharing these with advertisers, their actual paying clients?

Facebook has been building up to this since they first introduced their photo-tagging feature in 2010 — you know, the way you can tag friends in a posted photo to get their attention and let them know they’re a wee bit more internet-famous. It turns out — surprise, surprise — Facebook’s been watching us do this, and has compiled a database of what we all look like. An estimated 100 million people are tagged every day. 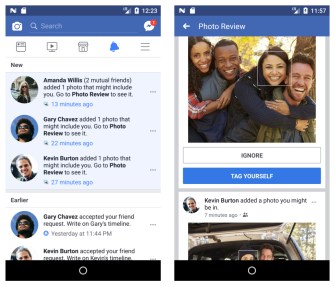 Facebook’s announcement says the technology works much the same way as their friend-recommendation system, you know, those little Facebook-generated slideshows in your newsfeed containing pictures mostly of people you don’t know, but who might want to friend. If the automatic photo tagging works as ineffectively, Facebook’s announcement may not be so creepy after all — who knows who their algorithm will identify as you?

With so much of our time spent on social media platforms like Facebook, and so many closed-circuit cameras everywhere, it’s reasonable to wonder who or what else is matching faces to names, and for what purpose. China, for example, has announced an effort to build a giant facial recognition database that will allow them to identify any of their 1.3 billion citizens in seconds. That Facebook has been doing something like this, likely for years, without saying anything sends a chill down the spine of anyone concerned with privacy.

You can opt out of auto-tagging, though it’s not clear from Facebook’s announcement if that also means opting out of being tagged by friends. The new feature is coming “soon,” and Facebook says there will be a new setting available to users. 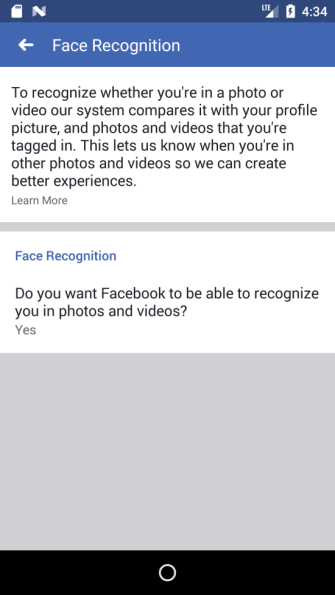 We’re all grownups here, and we understand that since Facebook is free for us, the company has a right to find other revenue streams. Still, thinking that a private company is cataloguing its estimated two billion users so throughly for resale — and with no meaningful oversight — is a bit unsettling. Now we each have to decide whether or not to opt out. Put in simple terms, is auto-tagging images really a feature, or simply an un-asked-for intrusion?

Related
Life
Scientists use CRISPR to insert an alligator gene into a catfish
Disease kills off 40% of farmed catfish. This gene protects them.
Neuropsych
How you breathe affects your brain
Your breathing rhythm influences a wide range of behaviors, cognition, and emotion.
Health
What happens when regular porn watchers abstain for a week?
Researchers watched for signs of withdrawal — but didn’t find any.
Neuropsych
Daily caffeine intake temporarily alters your brain structure
Compared to people who took a placebo, the brains of those who took caffeine pills had a temporarily smaller gray matter volume.
Thinking
Why you should laugh at yourself, according to Seneca and Nietzsche
“It is more human to laugh at life than to lament it.”
Up Next
Starts With A Bang
The Biggest Question
What does science have to say about the biggest questions about existence of all? Find out on our new Starts With A Bang podcast.Ever wonder about the biggest questions that there […]