If any of our fictional monsters are going to kill us, it’s zombies. Why? Because the vast majority of zombie scenarios have two things in common — a pandemic, and the extinction of humanity. And both of those scenarios are scientifically plausible.

Pandemics, or global disease outbreaks, don’t need zombies to be terrifying: they’re the third most likely cause of an extinction event according to the Global Catastrophic Risk Report (GCRR), as we’ve told you before. “Between the Spanish Flu, the Black Death, and the Great Plague of Justinian, over 25% of the world’s population was killed by disease,” according to the GCRR. Pandemics have such high death counts because they emerge from viruses we haven’t built up an immunity to — namely, ones that come from animals. “Viruses that have caused past pandemics typically originated from animal influenza viruses,” reports the World Health Organization (WHO).

A zombie pandemic would be quite a bit worse. Partly because zombies could be created the same way, like in the film 28 Later. But also because the result of a zombie pandemic isn’t infection: it’s consumption. Remember: the goal of almost every single zombie is to eat humans, be it their flesh, organs, or braaaaaaaaains. 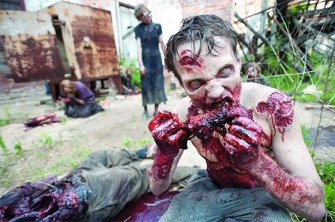 That cannibalistic bent complicates our usual protocol for handling pandemics. The three major steps to handling a normal pandemic are prediction, modeling and treatment, reports Popular Science. The usual protocol is for scientists to “track and collect zoonotic [infectious animal] pathogens in 20 hot-spot countries in order to create a database of the most dangerous.” Once they’ve identified a potential threat, they use “various data, including insect populations, human demographics, and airline routes, to map outbreaks. Health agencies use the maps to plan a response,” which can be rapid vaccination or quarantine, depending on the spread and speed of the disease.

If the pathogen causes people to eat each other, it breaks down that entire protocol: rapid vaccination and quarantine are necessary almost immediately because the disease spreads more quickly, giving scientists less time to accurately model and track the disease — much less create a vaccine.

How quickly would a zombie pandemic spread? There are 6 different possibilities, according to João V. Tomotani from the University of Sao Paolo, Brazil. He crunched all sorts of numbers for Geek Studies, from the number of humans in a given area and the minimal number of zombies needed to infect them, to the amount of time needed to train the humans in survival skills and the time needed to develop and distribute a vaccine. Those are a lot of variables to handle, and he punched them all into a simple turn-based game to create each model. He found that “in no scenario zombies stayed inactive for long, being either reanimated, destroyed or cured very quickly.” Meaning, a zombie pandemic will always spread relatively quickly — as long as there are living people to contaminate. Or, as Tomotani bleakly summarizes, “all humans have a chance of becoming a zombie.”

In this scenario, 20% of the population were trained after the first infection, and that took 500 turns. After 2,000 turns, 30% of the population had a vaccine. From there, everything goes slowly downhill and humans go extinct at 20,000 turns. “After the zombies “invaded” the human colony, the infection began to spread quickly,” Tomotani explains. “Once the population was trained and armed, the rate of infection got slower and the rate of zombie destruction got higher. Once the population was equipped with vaccines, the number of susceptible humans slowly rose for a while. Humanity’s demise was that the zombie infestation had already gotten out of control, with way too many zombies.”

This is what happens when it takes too long to arm a population, as Tomotani writes: “Once the population was trained and armed, the number of zombies was already overwhelming and there was nothing to be done. Humans became extinct after close to 1,000 turns and more than 7,500 zombies were left at the end.”

That, my friends, is the end of humanity.

But don’t worry! There are ways to survive a zombie apocalypse. The best way is to get ahead of the outbreak and move somewhere with a small enough population where you can avoid it. You’ll also need to be near fresh water and in a temperate enough climate to grow your own food, since supermarkets and Seamless will most likely be down. YouTuber Matthew Patrick (MatPat) looked at pandemic models, global population trends, and agricultural calendars to figure out the best place to go: a tiny little town near Ontario, Canada.

MatPat won’t tell us the second most popular place to go, but looking at the data it’s safe to assume it’s also in Canada as it would have to be in the same latitude and climate. Plus, MatPat is a stickler for using real science to solve fictitious problems; he even figured out the best weapon to use against zombies. I trust him.

If you don’t feel like traveling to Canada, or your passport gets eaten by the walking dead, don’t worry: some states are surprisingly well-prepared to ride out a zombie apocalypse. You just need to get to them before the outbreak starts:

Estately is more light-hearted in their approach than either Tomotani or MatPat. They use different data points (largely drawn from Facebook interests) and are not at all rigorous in their modeling. They don’t even specify the speed or kind of zombie outbreak they’re accounting for. Still, their chart does have similar useful factors for surviving a zombie apocalypse. The biggest indicator of human success from Tomotani’s models, remember, is quicky training and arming the surviving human population. Military personnel and veterans are the two most important factors in Estately’s rankings, and they are most likely to train and arm a human population for their survival.

Other important takeaways from Estately’s graph include states with physically active populations and fewer obese people are more likely to arm themselves and fight for survival. Those factors far outweighed a state’s success than how many people had guns and liked shooting them (including activities like “laser tag” and “paintball”). However, states with high concentrations of people who play zombie video games had a tactical advantage as well because they understood the enemy. States like Massachusetts and Connecticut ranked so low not because they weren’t fit, but because few people watch The Walking Dead or play Resident Evil. TL; DR — put down the Halloween candy and stay the heck away from the East Coast.

And now you know how to survive the zombie apocalypse. Good luck!

He’s studied apes for 50 years – here’s what most people get wrong.
▸
6 min
—
with
Frans de Waal
Up Next
Health

Many women are unable to have children due to age restrictions on IVF. Dr. Dominic Wilkinson, Director of Medical Ethics at the Oxford Uehiro Centre for Practical Ethics, challenges the 4 most flawed arguments.