A nanoparticle has been created by scientists, shaped like a dumbbell and made of silica, and they have successfully set it spinning in a vacuum at 60,000,000,000 revolutions per minute. Yes—60 billion.

That makes it the fastest human-made rotor in history. It can spin a dazzling 100,000 times faster than a high-speed dentist drill.

Called an “optically levitated nanodumbbell” in their abstract, one of the lead researchers, Tongcang Li of Indiana’s Purdue University, explained a bit more. “This study has many applications, including material science. We can study the extreme conditions different materials can survive in.” 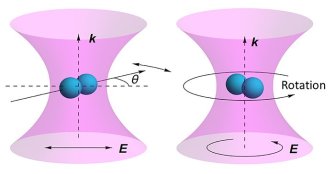 Members of the team also included scientists from Peking University, Tsinghua University, Collaborative Innovation Center of Quantum Matter and Sandia National Laboratories. They are not, however, the only team working on such a project.

The laser involved in this study to act as an optical “tweezer” can work in a straight line or a circle; when operating in straight-line mode, the rotor simply vibrates. It’s when they changed the laser to circular mode that they saw these incredible results.

This little device will eventually be used to study quantum mechanics and also to explore the properties of operating in a vacuum, where things like friction and gravity change. Don’t get your hopes up about watching it work, however; the particle is about the size of a bacterium.

“People say that there is nothing in vacuum, but in physics, we know it’s not really empty,” Dr. Li said.

“There are a lot of virtual particles which may stay for a short time and then disappear.”

“We want to figure out what’s really going on there.”

Our Solar System’s outer reaches, and what’s in them, was predicted long before the first Oort Cloud object was ever discovered.
Up Next
Politics & Current Affairs

Hackers working for Russia have gained access to hundreds of U.S. electric utilities in 2017, according to new reports from federal officials.