Dying hair too often can damage it. The chemicals affect the silky strands, causing them to become brittle and dry. Now scientists from Northwestern University have come up with a way to color hair using the super-material graphene in a process that is non-toxic and non-damaging. It also colors the hair so well that it lasts for over 30 washes. And if you ever thought your hair isn’t doing enough by just sitting there – graphene is a conductor that can turn hair into electrodes or allow it to be integrated with wearable electronic devices.

Commercial dyes use chemicals such as ammonia and bleach which open up the outermost layer of hair called the cuticle and allow in coloring molecules that trigger a reaction inside the hair. The reaction produces more color but can cause the hair to become very fragile, while the molecules it injects can be quite toxic.

The research was led by Jiaxing Huang, who is the professor of materials science and engineering in Northwestern’s McCormick School of Engineering. His team managed to bypass harmful chemicals by “leveraging the natural geometry of graphene sheets,” as explains their press release. Unlike a cocktail of small molecules used in current hair dyes, the sheets of graphene, a two-dimensional material made of a single atomic layer of carbon, are flexible and soft. Applied as a spray, they wrap around each hair to create an even coating.

The ink formula by Huang also utilized edible, non-toxic polymer binds that make graphene stick to the hair through at least 30 washes – a commercial requirement for permanent hair dye. Another cool thing about graphene-treated hair is due to graphene’s anti-static properties. It will reduce “winter-weather flyaways,” claim the scientists.

“It’s similar to the difference between a wet paper towel and a tennis ball,” explained Huang, when contrasting the geometry of graphene to other black pigment particles like carbon black or iron oxide, used in temporary hair dyes. “The paper towel is going to wrap and stick much better. The ball-like particles are much more easily removed with shampoo.” 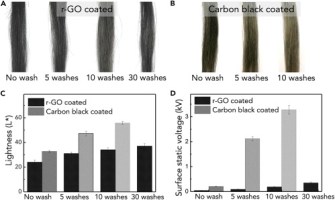 The durability of graphene-coated hair against washing. Credit: Northwestern University.

The particular properties of graphene also make it a safer alternative from a health standpoint. Unlike small molecules that can enter through the skin or inhalation, graphene is just too big to get into the body. “Compared to those small molecules used in current hair dyes, graphene flakes are humongous,” said Huang.

There is also the possibility of applying graphene to turn the hair conductive on its surface, which would make it possible to integrate with wearable electronics. “We are only limited by our imagination,” said Huang of that potential direction.

For now, Huang’s team created graphene-based hair dyes in various shades of brown and black, relying on graphene natural black color. The scientists plan to experiment with more colors next. Considering that the retail sales of at-home hair coloring topped $1.9 billion in the U.S. in 2016, the graphene coloring spray can become a dramatic commercial success.

You can read the study here, published in the journal Chem.

Related
Neuropsych
Psychology studies that go viral are likelier to be bogus
A new 20-year analysis of over 14,000 psychology studies finds that a study’s media coverage is negatively linked to its replicability.
The Future
How a device transmits radio waves with almost no power
Apart from the energy needed to flip the switch, no other energy is needed to transmit the information.
The Present
Radical idea: Redraw the U.S. map as a nation of city-states
While cities drive national economic growth, their political geography means they cannot effectively deal with inequality, poverty, and other socioeconomic problems.
The Learning Curve
Why do high IQ people stagnate in their careers? Emotional intelligence
Research suggests that emotional intelligence is more vital for success than IQ.
The Present
Even in the age of AI, some problems are just too difficult for computers
Computers are growing more powerful and more capable, but everything has limits
Up Next
Politics & Current Affairs
Congressional appropriations bill has a surprise for NASA: More than it asked for
Good news for space exploration?