Those with children, or who those work with them, know the struggle well. Bring something with peanut butter in it to a child’s event, and you will quickly see nervous parents go into hysterics. Food allergies are surprisingly common and growing more so. 15 million in the U.S. live with them currently, including one in thirteen children. The rate for such allergies increased 50% between 1997 and 2011. Some children grow out of it. Others never do.

Any allergy is in fact an autoimmune reaction. The immune system mistakes a food for an invading pathogen and springs into action, causing symptoms. Peanuts, seafood, milk, eggs, tomatoes, and strawberries are common triggers. But there are in fact dozens of foods that one can be allergic to.

The most common symptoms include hives, swelling of the lips, face, or throat, dizziness or lightheadedness, abdominal cramps, and diarrhea or vomiting. In extreme cases a severe reaction can occur, known as anaphylaxis or anaphylactic shock. Symptoms such as the tightening or constricting of airways, a severe drop in blood pressure, difficulty breathing, dizziness, or even loss of consciousness may result. Left unmitigated, such a reaction can be deadly. This is why those with severe food allergies must be extra vigilant. Some even have to carry an epipen. 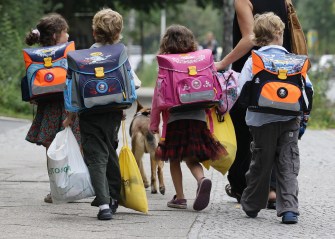 Infants and children are the most susceptible to food allergies, and rates have been climbing for two decades.

Unfortunately, not much is understood about what triggers such allergies, why it affects certain people and not others, and why some children grow out of it. One Australian study recently, published in the journal Cell, reports a simple reason for it, and steps to reduce or even reverse food allergies. It all centers on an important nutrient: fiber. Researchers at Monash University believe that a lack of fiber in the modern diet is what is causing the rise in food allergies. What’s more, a simple bowl of bran flakes with some dried fruit, say apricots, in the morning could prevent them — if you can get the kids to eat it, that is.

Jian Tan, a PhD student at the Monash Biomedicine Discovery Institute, was the main driver behind this study. It was performed on mice. Those allergic to peanuts were found to be protected against symptoms after eating a high fiber diet. It seems that fiber reshapes the bacterial colonies inside the gut. Conversely, those mice who had a diet of average fiber, calories, and sugar were found to have more severe peanut allergies.

It was soon discovered that those who ate more dietary fiber encouraged the development of helpful gut bacteria, which trained the immune system, and so helped the consumer avoid food allergies. From this we can conclude that the rise in food allergies may be due to the modern diet. This eliminates the “hygiene hypothesis” as a factor. This is the idea that the immune system is poorly trained, since it no longer comes into contact with a variety of substances—due to our squeaky clean environment. And so, an immature immune system gives rise to autoimmune disorders. Other studies looked at a high-fat intake. This was the first to consider dietary fiber. 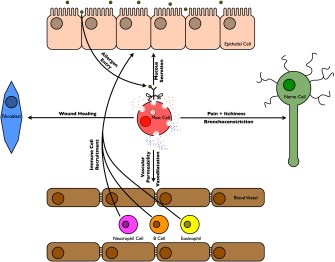 How tissues are effected by allergic inflammation.

Tan also found that a transfer of beneficial bacteria to mice without them helped reduce food allergy symptoms. He and colleagues determined it was short-chain fatty acids produced by gut bacteria which aided the immune system. This discovery may allow for the development of a new drug therapy. Working with colleagues in the laboratory of Prof. Charles Mackay, researchers discovered that short-chain fatty acids interact with specific cells in the immune system called dendritic cells. These control whether or not a person has a reaction to food allergens. By increasing the level of short-chain fatty acids, more dendritic cells are switched off, curbing or even eliminating the allergic response.

Vitamin A may also play a role. This and fiber are obtained through a diet high in fruits and vegetables. Since few adults suffer a vitamin A deficiency, this may explain the increasing rate of such allergies among infants and children. These results could even have implications for other inflammatory diseases as well. Of course, the next step is a human trial. Researchers must discover whether or not the same phenomenon holds true for our species. But if it does, food allergies may soon become a thing of the past.

Questioning isn’t just a way to get the right answer — it’s also a means for sustaining relationships and creative thinking.
Up Next
Culture & Religion

Big Think Partners with Hyper, a Game-Changer in the Video App World

Big Think teams up with Hyper, a new premium video app that curates 10 videos each day, with no buffering or data depletion.