Update: Just a week after the FDA approved Novartis’ Kymriah CAR-T cell therapy, the FDA has put on hold further testing of biopharmaceutical company Cellectis’ own CAR-T drug after the recent death of a subject in their clinical trials.

On August 30, the FDA made history by approving the first “living drug” in the U.S. It genetically modifies the patient’s own blood cells to enlist them as tiny warriors that seek out and destroy cancer cells, in this case, those associated with childhood leukemia. The newly approved drug, Kymriah, is a CAR-T cell treatment developed by Novartis and the University of Pennsylvania. Its arrival heralds a new chapter in the treatment of blood cancers and some tumors. In the FDA press release, Commissioner Scott Gottlieb says, “New technologies such as gene and cell therapies hold out the potential to transform medicine and create an inflection point in our ability to treat and even cure many intractable illnesses.”

“This is a brand-new way of treating cancer,” Dr. Stephan Grupp of Children’s Hospital of Philadelphia tells AP, “That’s enormously exciting.” Grupp is Emily Whitehead’s doctor — she was the first patient to receive the cell therapy, and though she was as close to 48 hours from organ failure when first enrolled in the experimental treatment, Whitehead has now been cancer-free for five years. 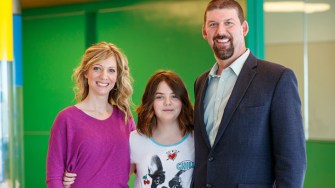 Whitehead and her parents today (CHILDRENS HOSPITAL OF PHILADELPHIA)

CAR-T was first developed by a group of doctors some five years ago and gained notice when Whitehead began treatment. With CAR-T, some T-cells are removed from a patient’s blood. A chimeric antigen receptor (CAR) receptor is added to them, and the enhanced T-cells are then returned to the patient’s blood stream, where they’re newly capable of hunting down and destroying cancer cells. Kymriah handles this turbocharging within the patients body. 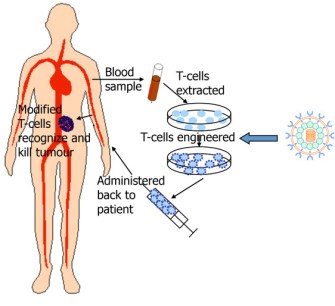 One of the doctors who developed the method, Carl June, notes that the therapeutic effects of CAR-T can be startling. In 2016, he told Popular Science about one patient who, after seeming at first not to respond, suddenly got better. When his blood was analyzed, it turned out that every single CAR-T cell he had had descended from a single T-cell. June recalled, “We infused 100 million into him, and just one of them did all the heavy lifting.”

What’s perhaps most exciting about CAR-T is that it operates similarly to a vaccination, providing the patient with lifetime protection against the targeted cancer.

As with all treatments, there is a risk. When the body’s immune system kicks into high gear to fight the cancer, extremely high fevers can occur as well as the production of proteins that produce inflammation. Though these signify that the treatment’s actually working, they’re also dangerous conditions in and of themselves, and require carefully monitoring and treatment. This is one of the reasons Kymriah’s cleared for use only under very specific circumstances.

It’s too soon to tell how widely applicable CAR-T will be — it’s especially suited to leukemia since infusing patients with T-cells is relatively simple. Research is therefore focusing for now on refining the therapy for patients of this disease. CAR-T treatment of other cancers will have to wait for the time being.

The universe is filled with unlikely events, but is also full of ways to fool ourselves.
The Present

The credibility problem facing the biomedical and public health establishment is, at least in part, a product of its own making.
Up Next
Politics & Current Affairs

Can Reason Make Room for Religion in Public Life?

Treating the theological and the political as warring forces stops us from looking at the more surprising ways that they interact and inform each other.