It’s a planet whose unanswered mysteries are as baffling as its appearance is captivating. Pretty much any image one sees of the gas giant can stop you in your tracks to stare in awe at the ever-shifting bands of colors and swirls and wonder “What is going on here?” You’re not alone in feeling that way. The more scientists learn — much of it from NASA’s Juno probe, which arrived at Jupiter in July 2016 and will continue orbiting it until 2022 — the more out of their depth they’re likely to feel. As Juno principal investigator Scott Bolton tells BBC, “We’re getting the first really close up and personal look at Jupiter and we’re seeing that a lot of our ideas were incorrect and maybe naive.” We do know Jupiter has a massive, uneven magnetic field, and a new study asserts that it’s behind — or beneath — the planet’s peculiar cloud formations.

Jupiter is a gas giant, not a solid rock like the planet on which we live. It’s mostly hydrogen and helium, plus ammonium, which we know here as gasses. This means that trying to get a peek under Jupiter’s dazzling cloud cover isn’t really the thing: The cloud cover is Jupiter.

If you were to travel inward from the clouds’ tops, you’d eventually reach a depth where the hydrogen is compressed into a liquid. According to NASA Space Place, this is due to 650 million pounds of pressure packing the hydrogen molecules together into that form. Rather than thinking of Jupiter as solid like Earth, it would be more on-the-mark to imagine a boiling, super-hot — 43,000°F (24,000°C) — soup pulled into a ball shape by the massive object’s equally gigantic gravitational field. It may be that there’s a solid core at the center of it all, but it’s not yet clear that there is. 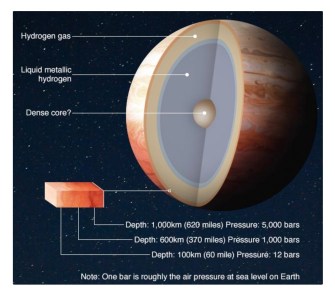 The spectacular turbulence we see is the product of Jupiter’s jet streams, winds that circle the planet. They reach down into Jupiter about 1,800 miles, or 300 km, and then stop. Why this happens is one of the riddles the new research’s authors, Navid Constantinou and Jeffrey Parker, wanted to solve.

Meanwhile, so many of the images of Jupiter we see pose other questions. 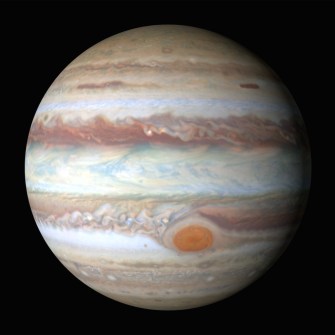 Jupiter’s infamous Great Red Spot seems to be a huge long-running storm that travels erratically across the planet — we’ve been observing it for at least 150. years, and maybe as far back as 1660. It’s twice as wide as the Earth and has winds blowing at about 400 mph. That’s about all we’re really sure about.

“Even in rooms of hardened researchers, these images of swirling clouds have drawn gasps,” NASA’s Mike Janssen tells BBC. 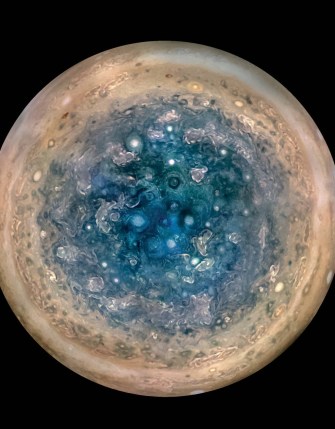 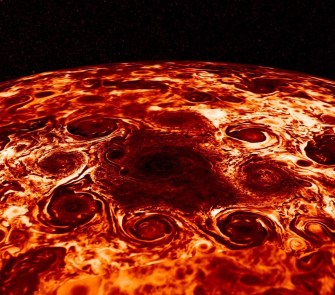 Much of the imagery sent back by Juno as it travels its 53-day elliptical orbit around Jupiter has been characterized by an incredible amount of visual detail, revealing things we’ve never seen.

For example, this area appears as a solid white swirl on older pictures. But Juno reveals its true complexity. 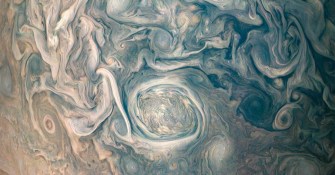 One of the insights delivered by the Juno mission is that Jupiter has a surprisingly strong magnetic field, and also that it’s irregularly shaped. Jack Connerney, lead for the Juno mission’s magnetic field aspect tells CNBC, ”Already we see that the magnetic field looks lumpy: it is stronger in some places and weaker in others. This uneven distribution suggests that the field might be generated by dynamo action closer to the surface, above the layer of metallic hydrogen. Every flyby we execute gets us closer to determining where and how Jupiter’s dynamo works.”

What Constantinou and Parker’s study of mathematical models has revealed is that a certain amount of intense pressure causes electrons from hydrogen and helium molecules to break loose. Once freed to bounce around, they form magnetic and electric fields. The key observation, though, is that on Jupiter, the required amount of pressure occurs at — and these figures should sound familiar — 1,800 miles, or 300 km down from the outer surface of the planet’s cloud cover. That’s exactly the depth at which the planets jet streams stop. Coincidence? What the scientists conclude, then, is that the collision between Jupiter’s jet streams and its uneven, lumpy magnetic field account for the bizarre stop-start-and-swirl visual patterns we see. The exact mechanics of this interaction will require further study to fully understand, but this seems a promising start at answering one of the most compelling mysteries in our solar system.

De-extinction, if it is ever possible, will not be simple.
Up Next
Starts With A Bang

What Was It Like When We First Made Protons And Neutrons?

In the earliest stages of the Universe, before there were protons or neutrons, we had a quark-gluon plasma.The story of our cosmic history is one of an expanding and cooling […]