The earth doesn’t spin at a constant speed. Various things can affect its rotation. Activities in its mantle and core affect it, as can atmospheric changes and ocean patterns. We’re not talking about big fluctuations in speed, but since 2011, the earth has been turning just a bit slower than usual, by a few-thousandths of a seconds. This has made our equator a bit smaller, like the best diet plan ever that lets you get thinner while moving around less. Unfortunately, though, tectonic plates haven’t see an equivalent reduction in size, and that means they’re beginning to feel the squeeze. And that can mean more seismic events at the surface. 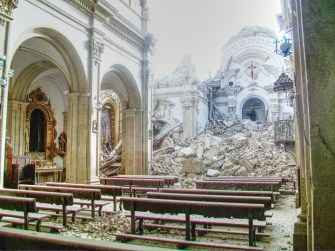 Geologists Roger Bilham and Rebecca Bendick went through the historical records for other slowdowns over the last 117 years and found an alarming correspondence between slowdowns and an increase in the number of major earthquakes. They presented their findings at a recent meeting of the Geological Society of America.

The geologists conclude that a slowing in the earth’s spin tends to precede increased seismic activity by 5-6 years, and thus the current deceleration may signal a higher number of major earthquakes for 2018, 2019, 2020, and 2021. These would be temblors of 7 or higher in magnitude. 2017 has so far experienced seven such quakes. Bilham and Bendick say we may see, on average, 20 of them in each of the four years.

None of these quakes-waiting-to-happen are created by the equatorial shrinkage, but their development will be accelerated by it. The researchers believe the tropics will be the area most affected, since that’s closest to the shrunken equator. 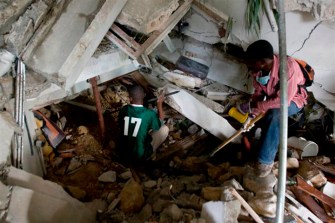 Due to “interactions of the lithosphere, mantle, and core,” as Bendick emailed Business Insider, the quakes seems especially centered around 10-year slowing periods like the one we’re currently in the midst of.

The bad news here is, obviously, major earthquakes. The good news is that we may be getting an unusual heads-up of impending seismic calamity. As such, the findings represent a rare opportunity for local governments in quake-prone areas to shore up their infrastructure as best they the can, as soon as they can, while they can.

Related
Neuropsych
Daily caffeine intake temporarily alters your brain structure
Compared to people who took a placebo, the brains of those who took caffeine pills had a temporarily smaller gray matter volume.
Thinking
Why you should laugh at yourself, according to Seneca and Nietzsche
“It is more human to laugh at life than to lament it.”
Hard Science
The violence of the Tonga eruption is a wake-up call to watch other submarine volcanoes
Out of sight, but not out of mind.
The Present
How circular economics can make us happier and less stressed
Entrenched business wisdom says that community-led economic systems are pure fantasy. Douglas Rushkoff disagrees.
The Learning Curve
The art of asking the right questions
The right questions are those sparked from the joy of discovery.
Up Next
Thinking
Why Philosophy Is so Important in Science Education
Why do scientists look down on philosophers? And are they right to do so?