The oldest nearly complete skeleton found in Britain, at Cheddar Gorge in Somerset, southwest England, was first encountered in a cave, all the way back in 1903. Since then, scientists have worked hard to predict what he might look like, all the while reconstructing “Cheddar Man.”

Now, using the latest in DNA analysis, scanning technology, and modeling techniques, they have just completed his reconstruction, and he looks quite fascinating. 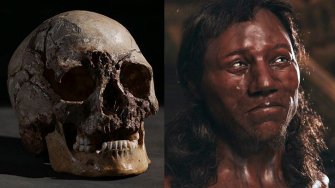 Photos: The Trustees of the Natural History Museum, London.

“Cheddar Man’s genetic profile places him with several other Mesolithic-era Europeans from Spain, Hungary, and Luxembourg whose DNA has already been analyzed. These ‘Western Hunter-Gatherers’ migrated into Europe at the end of the last ice age and the group included Cheddar Man’s ancestors,” explained University College of London’s Professor Mark Thomas, one of the scientists who completed the project.

So how did they arrive at this picture?

DNA, from inside the skull of Cheddar Man, was sequenced. As in the entire genome.

The results will be featured in an upcoming film, “First Brit: Secrets of the 10,000 Year Old Man,” to be released on February 18 by Channel 4.

The news was particularly interesting because of the assumptions made when Cheddar Man was first discovered; when the skeleton was initially found, folks assumed he was white, like most Brits.

Cheddar Man shows us that’s not the case.

“It really shows up that these imaginary racial categories that we have are really very modern constructions, or very recent constructions, that really are not applicable to the past at all,” commented Tom Booth, an archaeologist at the Natural History Museum who worked on this project.

Much to the chagrin of some racists, it’s just not reality.

Related
The Present
How heat pumps of the 1800s are becoming the technology of the future
Innovative thinking has done away with problems that long dogged the electric devices — and both scientists and environmentalists are excited about the possibilities.
Starts With A Bang
JWST’s hunt for most distant galaxies gets double boost
Along with gravitational lensing and ALMA’s incredible long-wavelength spectroscopy, JWST is reshaping our view of the early Universe.
Thinking
Finding your essential self: the ancient philosophy of Zhuangzi explained
Adopting a healthy scepticism towards inherited ideas means “emptying the container of the Self.”
The Future
Startup’s bladeless flying car is designed to reach Mach 0.8
One of Jetoptera’s VTOLs is expected to reach speeds of around 614 mph, about as fast as a commercial jet airliner.
Health
New blood types are often discovered following medical disasters
New blood types are regularly discovered by an unusual absence or an unusual presence — both of which can result in tragedy.
Up Next
Surprising Science
Brain scans reveal that you and your bestie literally think alike
A new study finds that the more two people think alike, the more their brains operate the same way.