Whether Crohn’s disease is more prevalent today than in the past, or if we are just better at diagnosing it, is hard to say. Around 700,000 Americans currently suffer from Crohn’s. Millions endure the disease worldwide. Almost everyone knows someone who cannot eat gluten. This is a wheat protein found in wheat-based carbs but also processed foods, even things like gravies and sauces. Those who have Crohn’s need to be careful. Accidentally ingesting gluten sets off what looks like an allergic reaction.

Sufferers experience gastrointestinal symptoms including abdominal cramps, bloating, diarrhea, and more. Some people experience fatigue and weight loss. There are those who find blood in their stool. In extreme cases fever, nausea, and vomiting occur. This is not common. In rarer cases still, sufferers may experience eye irritation, joint pain, mouth ulcers, and swollen, painful areas on the skin. With Crohn’s, it can run the gamut. Some experience severe symptoms, others mild, but most fall somewhere in-between.

It is a lifelong disorder. Though it can be managed, there is no cure. Besides a lower quality of life, those who have Crohn’s are at higher risk of colorectal cancer and even premature death. 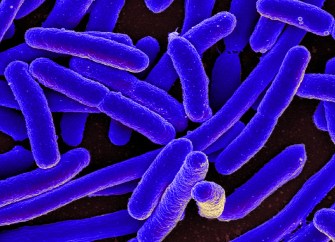 E.coli under an electron microscope.

This was originally thought to be an autoimmune disorder. That’s when the immune system mistakes something harmless for a foreign invader. This triggers a response where it ends up attacking healthy tissue instead, causing symptoms. M.S., allergies, rheumatoid arthritis, asthma, and other conditions fall into this category.

A new study finds that instead, Crohn’s is caused by two bacteria and a fungus. Published in the journal mBio, scientists identified adherent-invasive E. coli (AIEC) as the trigger behind activating Crohn’s. Researchers also found that those who have experienced food poisoning are more likely to develop the disease.

Mahmoud A. Ghannoum, PhD was the study’s senior author. He is the director of the Center for Medical Mycology at Case Western Reserve and University Hospitals Cleveland Medical Center. What he and colleagues found was that both fungi and bacteria cooperate inside the body to cause Crohn’s. Previous research found that such seeming disparate life forms as fungi and bacteria sometimes work together. 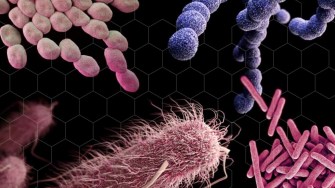 Artist’s rendition of different microbes inside the human gut.

In addition, a bacteria called Serratia marcescens and a fungus known as Candida tropicalis also played a role. When all three are present in the biofilm of the gut, Crohn’s is likely. The biofilm is a layer of sentiment residing in the colon and other areas of the body, where microbes reside.

Researchers detected the presence of both bacteria’s and the fungus there. These together cause inflammation, which leads to Crohn’s. Though E. coli has been implicated before, the others have not. These critters must have all evolved together to interact in this way, according to Dr. Ghannoum.

A lack of beneficial bacteria was also detected in Crohn’s sufferers. Thousands of different varieties of bacteria live in our gut, who when taken together number in the trillions. This is what is known as the microbiome. Researchers found strong similarities between the microbiota of one’s family, or the makeup of their microbiome, and that of Crohn’s sufferers. That makes sense, as the microbiome is inherited from one’s mother during birth, though it changes due to many forces, and becomes as unique as each individual, over time. Just the presence of these harmful microbes isn’t enough to cause the disease. Diet, genetics, the environment, and other factors each play a role.

Researchers hope that this discovery will help lead to new diagnostic tools and better treatment options. One suggestion is probiotic therapy. Scientists who have studied the microbiome say that harmful and beneficial bacteria must be in balance, to keep one another in check. When too many good bacteria have been wiped out, say from a course of antibiotics to fight off infection, the bad microbes sometimes rise up and cause health problems. This discovery may lead to a probiotic treatment for Crohn’s to restore balance in the gut. Others posit an antifungal treatment may be warranted.

To learn how to control Crohn’s through diet:

We could even benefit from more whataboutisms — if they’re used properly.
Up Next
Personal Growth

2 Ideas About Sneaking Up On Letting Go

Edward Slingerland offers two possible ways to sneak up on becoming effortless without making a direct effort to do so.