In Episode 146, late in the run of Star Trek — The Next Generation, its writers finally addressed an obvious issue with science fiction: How come no matter where we go out there, aliens look roughly like us? Obviously, the real answer is that they’re played by human actors, but science fiction has helped instill in us a prevalent bias toward expecting extraterrestrial beings to have arms, legs, heads, not to mention spines, skin, and so on. Little green men are still men, after all.

But even on earth, we don’t represent the norm. There are many more insects than there are humans, and in the oceans? Yipes. Consider giant tube worms. 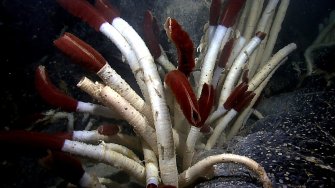 Why on earth (sorry) should extraterrestrials look like us, or even be recognizable as living beings to our limited imaginations? How do we know they don’t already live among us, floating, slithering, flying nearby?

“It’s not like you can walk into a new environment with your lovely robot on some other planet, look at the ground and go gosh it’s life! Instead it’s ‘gosh it’s blue something, and it’s got a copper signal, and I don’t know’ — and then you have to investigate.”

Boston showed the crowd her own rogue’s gallery of omigosh-is-that-alive earthly creatures found in caves. 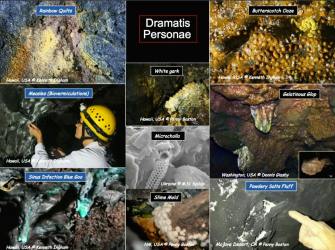 Boston frames this as the great challenge of astrobiology: Simply being able to recognize life when we see it. Our genetic tools fall short when it comes to examining unknown forms, and with her feeling that off-world life may be weird and microbial, we’ll be essentially clueless about who we’re meeting.

It’s not like we can confidently ascertain life-supporting conditions with our limited knowledge. In harsh environments around the globe, we find living creatures where our current understanding tells us there can’t be.

The astrobiologist ended her talk with he warning that we’d better come up with the technology to recognize life in whatever form it appears before we actually meet up with aliens. If we haven’t already.

Related
The Present
Radical idea: Redraw the U.S. map as a nation of city-states
While cities drive national economic growth, their political geography means they cannot effectively deal with inequality, poverty, and other socioeconomic problems.
The Learning Curve
Why do high IQ people stagnate in their careers? Emotional intelligence
Research suggests that emotional intelligence is more vital for success than IQ.
The Present
Even in the age of AI, some problems are just too difficult for computers
Computers are growing more powerful and more capable, but everything has limits
The Future
How the metaverse will revolutionize K-12 and higher education
Imagine going on a tour through the human circulatory system as a tiny cell. That is just one example of education in the metaverse.
Starts With A Bang
Ask Ethan: What are white holes, and do they really exist?
In General Relativity, white holes are just as mathematically plausible as black holes. Black holes are real; what about white holes?
Up Next
High Culture
Listening: The Most Important Skill That Nobody Teaches
Improvisational theater, an often overlooked genre, involves dynamic lessons on listening that can help all kinds of professional relationships and improve conversation.