What’s inside a black hole? In most, there’s something called the singularity—an area of such density and intense gravitational force that not even light can escape. Don’t venture too close. Once you enter the event horizon—the outer rim—it’s all over for you. You’d be shredded to ribbons of atoms that’ll be sucked down into its depths. But there may be one exception. Mathematicians have recently unveiled a scenario even more mind-blowing.

If you stepped into a Reissner-Nordström-de Sitter black hole, the deterministic nature of the universe would break down, and your past and your future would no longer be connected. The past would simply slide away, while an infinite number of futures would open up before you. How is this possible?

A black hole is created when a star collapses into itself, pulled in by the force of its own gravity. This is the last stage of its life. According to the Reissner-Nordström solution of general relativity, a black hole that is electrically charged and collapses creates a second zone located within the event horizon, known as the Cauchy horizon. Here, space-time is indeterminate, and the ability to predict the future mathematically is no longer possible. 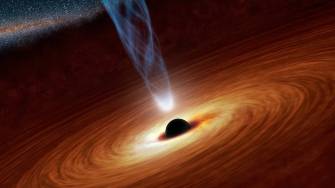 Plasma being sucked into a black hole. Credit: NASA/JPL-Caltech.

Vitor Cardoso of Lisbon University and colleagues dove into these theoretical black holes recently, mathematically speaking, and surfaced with some pretty outlandish findings. Entering the Cauchy horizon of such a black hole may sound nice at first. But how long would it take you to decide which of your infinite lives to pursue? That may be a moot point. Even if you did select one, you wouldn’t be able to leave the Cauchy horizon. You’d be caught in its gossamer web, a casual observer of every permutation of a future you’ll never realize. So why does this occur in the first place?

If true, this weird, theoretical phenomenon challenges the deterministic nature of Einstein’s general relativity. So far, the theory has held up fantastically to anything physics has thrown at it. For instance, we can predict astronomical phenomena with surprising accuracy. Indeed, almost anything that occurs in the universe can be understood and its behavior predicted mathematically, provided we know oodles about its origin. One place this breaks down, however, is here in the Cauchy horizon of a Reissner-Nordström-de Sitter black hole.

So the reason why your past disappears and your future is indeterminate is that space and time merge for a solitary instance inside this horizon. Einstein’s general relativity accounts for singularities. In black holes without them, his theory is no longer valid. It’s at this point that we run into a debate within the physics community.

Physicists argue over the “strong cosmic censorship” conjecture, first proposed in the ’70s by British physicist Roger Penrose. If there was even a slight deviation in the immense gravitational pull of an imploding star, the black hole would end up with a singularity, rather than a Cauchy horizon, argued Penrose. What Cordoso and colleagues have proven is that technically, a Cauchy horizon could exist in a universe that’s expanding at an ever-accelerating rate, such as ours. The team’s bizarre and thought-provoking findings were published recently in the journal Physical Review Letters. 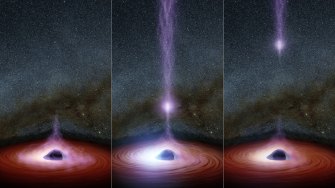 Black holes already do some pretty weird stuff, like this flare of X-rays coming out of the corona. Image credit: NASA/JPL-Caltech

It’s the electrical charge of the former star that allows for resistance against the singularity’s intense pull, which in turn causes a Cauchy horizon to take shape, Cordoso and colleagues argue. Due to the ever-increasing speed at which the universe is expanding, only so much time and energy is available to the singularity. So despite its intense pull, a singularity is still limited in its power.

If it all sounds confusing, having no past and an infinite number of futures, rest assured that the team who proved it feasible aren’t themselves sure what such an experience might be like. One researcher, physicist João Costa, told Physics World, “Thinking about Schrödinger’s cat, we know we can assign probabilities to the cat being alive and dead. But if the cat were to fall inside the Cauchy horizon we could not even compute these probabilities.” 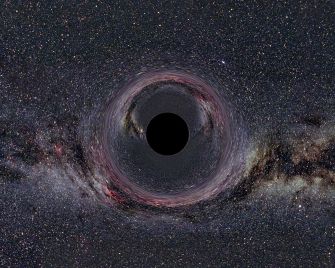 The jury is still out on whether certain types of black holes contain a Cauchy horizon. Credit: NASA/JPL-Caltech.

Those physicists in the strong cosmological censorship camp say, just because it’s theoretically possible, doesn’t make it so. In fact, this conjecture has stood strong against all the work in the area that’s been hurled against it in the last several decades. Still, this University of Lisbon study is the strongest refutation thus far of Penrose’s conjecture.

While charged black holes aren’t expected to technically exist somewhere out in space, rotating or neutral black holes are. They’re thought to go through a similar metamorphosis as the type investigated here. Still, more work needs to be done to tell whether something that’s just theoretically possible, is actually happening to certain kinds of black holes out there, somewhere, in the inky depths of outer space.

Want to know when we’ll actually take a picture of a black hole? Click here.

Related
Neuropsych
Psychology studies that go viral are likelier to be bogus
A new 20-year analysis of over 14,000 psychology studies finds that a study’s media coverage is negatively linked to its replicability.
The Future
How a device transmits radio waves with almost no power
Apart from the energy needed to flip the switch, no other energy is needed to transmit the information.
The Present
Radical idea: Redraw the U.S. map as a nation of city-states
While cities drive national economic growth, their political geography means they cannot effectively deal with inequality, poverty, and other socioeconomic problems.
The Learning Curve
Why do high IQ people stagnate in their careers? Emotional intelligence
Research suggests that emotional intelligence is more vital for success than IQ.
The Present
Even in the age of AI, some problems are just too difficult for computers
Computers are growing more powerful and more capable, but everything has limits
Up Next
Culture & Religion
Were there ever any real Amazon warrior women?
The myths and legends of the Amazons are fascinating and telling of the Greek culture they enthralled and through them, our own culture as well.