Elon Musk wants to make sure humanity lives and lives better. His whole legacy is built around the idea of making the world a better place. His missions to convert every home to solar and colonize Mars are a testament to his dedication. Musk has taken another step to preserve human life: Meet Model X, a Tesla SUV built to defend its passengers from a biological attack.

Inside the car is a bioweapon defense button in the dash display, which Musk says “gives you hospital-level air quality” when the mode is activated. It pumps up the Model X’s HEPA air filter to maximum, which Musk says is strong enough to rid any toxins from a bioweapon.

The Model X not only protects your loved ones against biological incidents, but also protects against the standard car crash. Musk boasted in the announcement that the Model X has a five-star crash test rating… if there was a sixth star, the Model X would get it.

When it comes to front-end crashes, it’s simple calculation of force over distance. The Model X has no gas engine, which, in standard cars, can get pushed into the passenger cabin. The Model X, therefore, has a higher “crumple zone” to absorb and distribute the force of the impact. Musk joked, “It’s the difference between jumping into a pool or a pool with a rock in it, so…”

When it came to the side-pole impact test, the same results held true, beating (what was) the highest-rated SUV.

See the results for yourself: 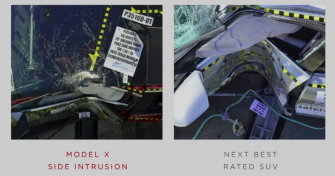 Check out the full announcement here.

Until now, researchers believed davemaoite could never be found on Earth’s surface.
Up Next
Starts With A Bang

The Difference A Dark Sky Makes

Image credit: iStock/alexeys, via http://www.sierraclub.org/sierra/2015-5-september-october/green-life/supermoon-and-lunar-eclipse-september. If you saw the lunar eclipse from a city, here’s what you missed. “The reports of the eclipse parties not only described the scientific observations […]