Quantum entanglement is something that links particles in such a way that they instantly respond to and affect each other, even over a large distance.

The effect is such that it appears to defy the conventional laws of physics. Hence, Albert Einstein called it a “spooky action”.

Because various environmental factors can influence and disturb the effect, it’s something that cannot be replicated on any large scale—that is, beyond light, atoms, and electrons.

In this case, what was used is two vibrating drum-like heads about 15 micrometers wide each. The researchers found that they could, indeed, make the objects behave according to the rules of quantum physics—that is, quantum entanglement. 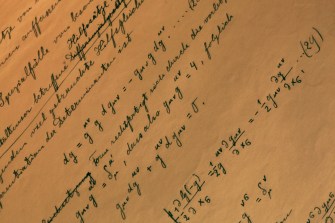 JERUSALEM – MARCH 09: A detail from Albert Einstein’s General Theory of Relativity which is on display in its entirety for the first time, at the Israeli Academy of Sciences and Humanities on March 9, 2010 in Jerusalem, Israel. (Photo by David Silverman/Getty Images)

As reported in Nature, “Our work qualitatively extends the range of entangled physical systems and has implications for quantum information processing, precision measurements, and tests of the limits of quantum mechanics,” write the researchers.

What the researchers did was cool a superconducting electrical circuit to just about absolute zero, -273 Celsius, to remove possible environmental interference. Weak microwave fields were then applied, and voila, each of the drum heads vibrated. The researchers kept this vibration going for almost 30 minutes.

“It is, of course, immensely satisfying to see the vision that you have laid out come to fruition, and exciting to imagine where experiments like this might ultimately lead, and what fundamental insights and technological development they might ultimately yield,” said one member of the team, Matt Woolley from the University of New South Wales in Australia.

All roads may not lead to Rome, but many of them lead to wealth and prosperity — even 1,500 years after the fall of the Roman Empire.
Up Next
Mind & Brain

Why more highly educated people are less into conspiracy theories

Two studies, summing up almost 5,000 participants, point to an interesting link between education and conspiracy theories.